Pillars of the Foundation

Throughout its 129 year history, there are many individuals who have made a significant impact on CHI St. Alexius Health Bismarck and its Foundation. In 2014, the Pillars of the Foundation award was created to pay tribute to those who have changed the course of history for CHI St. Alexius Health Bismarck and in turn helped transform the region’s healthcare for the better.

2017 Pillars of the Foundation Recipient 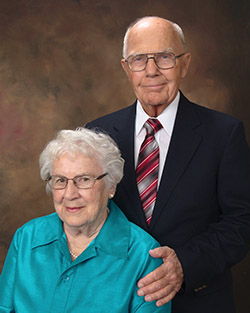 The 2017 Pillars of the Foundation recognition is given to a man whose life not only began and ended within CHI St. Alexius Health’s walls, but was also spent diligently working for the medical center’s growth to serve future generations.

Bismarck native, Myron Atkinson, was born at St. Alexius in 1927. He graduated from Bismarck High School (BHS) and was one of the first students to attend Bismarck Junior College (now known as Bismarck State College) which operated out of the third floor of BHS. He later received degrees in business and law at University of North Dakota. In 1951 Myron married his kindergarten classmate, Marge, and after spending several years in the U.S. Army they moved back to Bismarck with their first born. They created a home for themselves while having six more children who were all born at CHI St. Alexius Health.

Myron was very much a family man while also being a dedicated lawyer whose legal interests resided in healthcare and real estate. Under the leadership of three CHI St. Alexius Health administrators – Sister Paul McCarthy, Sister Joanne Graham and Dick Tschider – Myron served as legal counsel. Described as a visionary, Myron was instrumental in acquiring the real estate needed to create the medical zone district in downtown Bismarck, which essentially restricts the conveyance of real property unless it is for medical purposes. Along with this creation, Myron secured the purchase of the Soo Line roundhouse and railroad property. This allowed CHI St. Alexius Health to develop Great Plains Rehabilitation Services, home care and hospice services, the Technology and Education Center (which is utilized for community education functions), and the hospital’s parking lot.

In addition to his real estate contributions, Myron was involved in acquiring financing for CHI St. Alexius Health’s expansion and the establishment of healthcare services such as Archway Mental Health Services and the Heart and Lung Clinic that brought 2015 Pillars of the Foundation recipients, Dr. Riffat “Riff” Morgan and Dr. Margaret Edna-Forke Morgan, to Bismarck.

In addition to his desire to ensure CHI St. Alexius Health’s successful future, Myron was passionate about the Sisters of Annunciation Monastery and their other work, and he served as legal counsel for: Garrison Memorial Hospital under Sr. Madonna’s leadership; for Mary College/University of Mary while under Dr. Miller’s and Sister Thomas Welder’s presidencies; and for Annunciation Monastery while under Prioresses Sister Joanne Graham, Sr. Susan Lardy and Sr. Susan Berger.

Myron Atkinson’s life’s work truly enhanced healthcare for Western and Central North Dakota. His influence was known by many administrators, community members and donors, and can be summed up with the following story: When a young Sr. Joanne Graham was appointed as CEO of CHI St. Alexius Health, she was told not to worry because Myron would be her mentor and knew anything she needed to know.

2016 Pillars of the Foundation Recipient 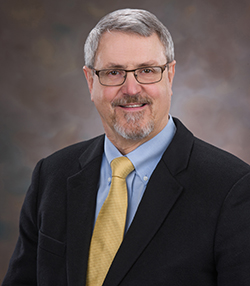 It was Independence Day in 1978. The small town of Elgin, North Dakota was celebrating their annual rodeo celebration. The western skies turned pitch black; a storm was rolling in. A couple hours later, a destructive tornado swept through Elgin, turning out to be one of the deadliest tornadoes in North Dakota history.

Bang! Bang! Bang! That’s all Dr. Steven Hamar remembers hearing on his front door just two days after making the long U-Haul trip from Texas, where he attended medical school, to Bismarck. He was scheduled to begin work at Mid Dakota Clinic as a surgeon in mid-July, but there were a couple hundred patients anticipated to arrive at CHI St. Alexius Health who were severely injured in the tornado.

With no hospital privileges, no license to practice in ND and no insurance, Dr. Hamar arrived at the hospital prepared for what lay ahead. He was quickly shown the dressing room and operating room, and then taken to the emergency department. A man presented in the ER who had been badly injured. He was Dr. Hamar’s very first patient. Due to the outstanding experience he received at his residency at Baylor College of Medicine in Houston, Texas, Dr. Hamar was prepared. He performed a diagnostic peritoneal lavage (DPL) to check for internal bleeding, which was the first DPL performed at CHI St. Alexius Health. Dr. Hamar’s patient was eventually taken to the Intensive Care Unit (ICU). Because he needed to be reached in ICU to care for his patient, Dr. Hamar stayed as long as needed since he did not have a phone yet at his new home in Bismarck.

The dedication of Dr. Hamar that day and throughout the past 38 years has had an enormous impact on Mid Dakota Clinic and CHI St. Alexius Health. “I got involved as much as I could from the beginning and had great support from my fellow surgeons,” stated Dr. Hamar. He sat on several committees at the clinic and hospital and played a vital role in starting the Advanced Trauma Life Support (ATLS) program at CHI St. Alexius Health.

Dr. Hamar always had a love for trauma. In western North Dakota, CHI St. Alexius Health is a pivot point in trauma care. Around the time of Dr. Hamar’s arrival, emergency room physicians were just being introduced. Specialists from around the clinics and hospital were called in to the emergency room when a patient arrived. Now, there is a team of emergency and trauma providers.

Dr. Hamar experienced many changes over the past several years. He performed hundreds of surgeries during his time as a surgeon. He said, “Patients used to stay in the hospital for several days but now many surgeries are same-day surgeries. With transitional care and home health care, patients are being hospitalized less.” Dr. Hamar also recognized that vein surgery was becoming a popular procedure and this sparked his interest. More than a decade ago, he started the Vein Center at Mid Dakota Clinic. The Vein Center has had tremendous success in this region with Dr. Hamar performing numerous vein surgeries within CHI St. Alexius Health.

“The positive correspondence we received over the years from his patients has been very humbling,” stated Dr. Hamar’s wife, Donna. He loves making his patients laugh. Dr. Hamar is known for his humorous jokes after surgery. “The best words I can hear from a patient is ‘thank you’ and that’s what makes it all worth it,” stated Dr. Hamar.

2015 Pillars of the Foundation Recipient 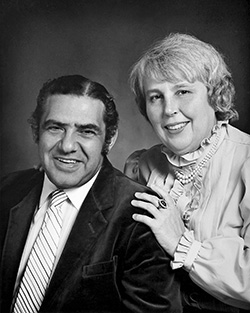 The 2015 Pillars of the Foundation award recipients are Dr. Margaret Edna Forke-Morgan and Dr. Riffat “Riff” Morgan. Joining CHI St. Alexius Health in 1966, the Morgans were recruited to form an anesthesiology department and direct the nurse anesthesia department. The Morgans were the first anesthesiologists in North Dakota. As partners, Morgan Associates’ dedication to advancing the quality of health care and educating future health care professionals was proven by their innovative efforts in the medical world. They not only brought medical expertise, but also sincere compassion and caring for those they served.

Growing up, Dr. Margaret Forke-Morgan attended several schools across Canada and graduated in Winnipeg. She went on to earn her medical degree and complete an internship, cardiopulmonary fellowship, and residency at University of Manitoba, where her research was published in the official pulmonary disease journal. While at University of Manitoba, she met Dr. Riffat Morgan. Born in Egypt, Riff received his medical degree at University of Enshamas in Cairo. He moved to the United States for an internship and completed an anesthesiology and critical care residency. His fellowship took him to Manitoba, where he met his life-long partner. Dr. Margaret and Dr. Riff are both board-certified in anesthesiology, which led them to Bismarck.

In the 1970s, Margaret established the first approved center for cystic fibrosis patients, which was one of the most advanced, nationally accredited cystic fibrosis centers in the Midwest. Research on children's cystic fibrosis started here as well. Some of Riff's accomplishments included setting up the blood gas lab and upgrading the department with advanced monitors and other electronic equipment, playing an instrumental role in starting the pain clinic. He also started emergency air care transport.

The Morgans retired in 1992 and now live in Sanibel, Fla. The couple likes to stay involved and they are committed to future education and research on respiratory health. They support respiratory and other health science students’ education. Dr. Riffat states, “We spent many hours, days and nights, in the hospital. We appreciate the Sisters and the University of Mary for everything they have done.”

2014 Pillars of the Foundation Recipient 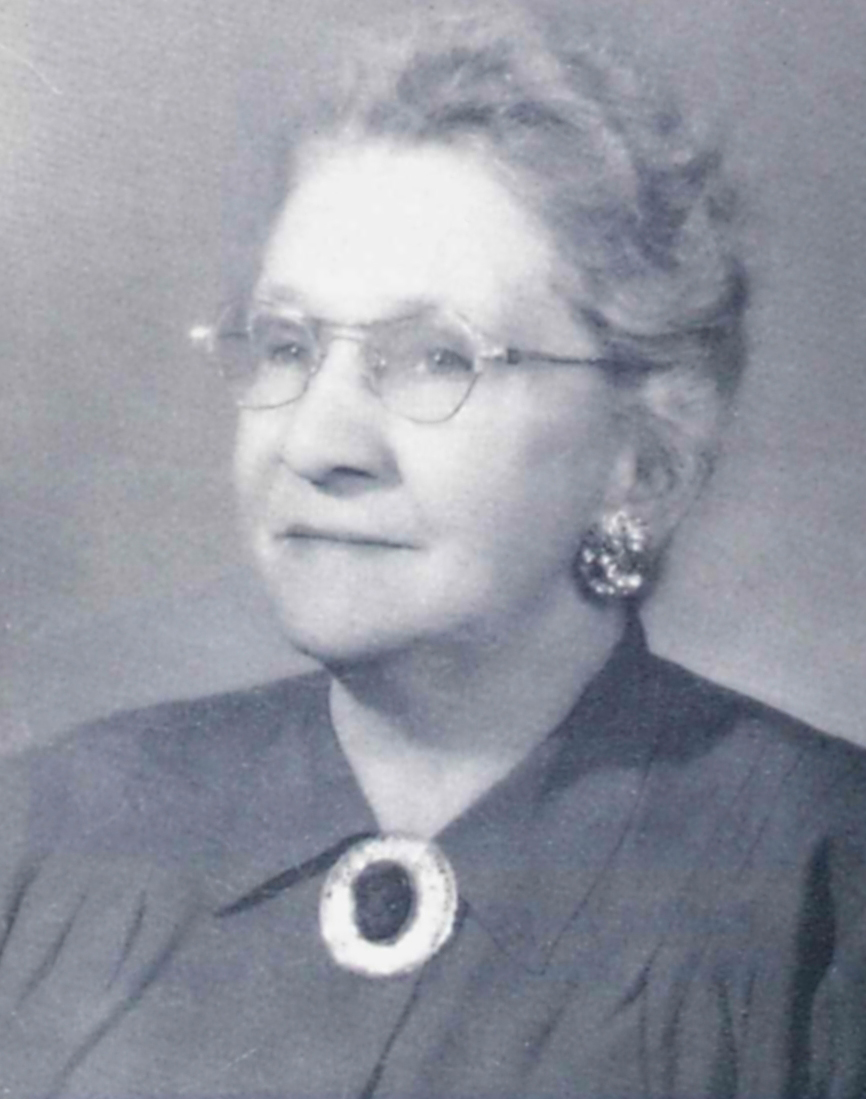 Mrs. Ruby Jeanette Gay Whittey was born in Plymouth, Indiana, January 22, 1886. She married Charles B. Whittey in Plymouth on November 26, 1908. Prior to her marriage, she taught in country schools and was a proofreader for a large book printing company in Chicago.

Mrs. Whittey was a woman born years ahead of her time. The Whittey’s seven children, born in a span of nine years, were well aware of “Women’s Lib” long before the expression was coined or turned into a fashionable women’s movement. She had three sons and four daughters, with one son dying in infancy.

She moved to Bismarck from Indiana with her husband and two children in 1913. After arriving in Bismarck, she substitute taught in the Bismarck school system for many years, and also was a society editor for the Bismarck Tribune.

Some of her happiest years were those spent at St. Alexius where she volunteered her services while in her late sixties and early seventies. She was a close friend of Sister Andriette’s (then the administrator at the hospital). It was with Sister’s urging that she formed the St. Alexius Women’s Auxiliary.

At the early Women’s Auxiliary meetings, the ladies wrapped bandages that had been laundered at the hospital and put them in sterilizer prior to patient use. The Auxiliary established the gift cart for the patients; going room to room with many beautiful handmade articles and toiletries. They also made items for their annual fund-raising sale, from which the proceeds went for needed articles for use in the hospital.

Mrs. Whittey was later hired by the hospital as a public relations person and assistant to Sister Andriette. It was with the help of the Auxiliary that she accomplished the project of making pleated draperies for all the patient rooms of the then new north wing. She planned room colors, chose the bedspreads and picked out different coordinating floral drapery materials for the windows. She also supervised the installation of the draperies and completion of the rooms. Prior to that time all the hospital rooms had the same drab look. Bringing color into the lives of the patients for a happier and faster recover was, to Mrs. Whittey, a very special achievement of which she was exceptionally proud.

It was also during this period that she found time to travel to various hospitals around the state, assisting them in organizing their hospital auxiliaries. Mrs. Whittey also visited other states; representing St. Alexius and the hospital auxiliary at various state conventions. She was elected first president of the state auxiliary.

Mrs. Whittey and her husband made their winter home in Ft. Meyers, Florida for many years. After her husband’s death, she lived with her daughter and son-in-law in Missouri where she died in 1979 at the age of 93.

ABOUT THE BISMARCK FOUNDATION