Meet the volunteers knitting hats for the babies of Bismarck 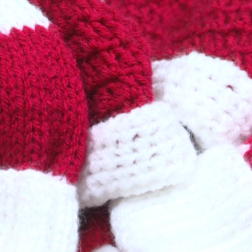 If you've had a baby born in Bismarck in the past decade, there's a good chance your baby received a tiny knit baby cap they got in the hospital. But do you know who made them? Both CHI St. Alexius and Sanford Health have a dedicated group of volunteers that fill the order.

It was a sign from above that got Sue Lacher knitting again.

"I was looking through some things in my home and I found my mother's pattern for knitted baby caps. I knew at that point that she was talking to me from heaven and wanting me to utilize my time because she always wanted me to utilize my time,” said Lacher. She started the St. A’s knitting group. She started knitting caps for babies born at St. Alexius in Bismarck. But she needed a group to help meet the 100 caps needed a month. A number that keeps growing.

Every month, like clockwork, Sue delivers the bounty. The hats are for all babies, including those in the NICU.

"It's awesome that people take time out of their day to make other people happy and feel comforted by, you know, someone that cares,” said Dan Sydlow. His son is in the NICU.

It's not just the St. A's babies that get hats. Sanford has their own volunteer group too. Their approach is a little different from Sue's. Sanford's group makes hats-and octopi- for all their babies. The octopus is a whole different animal according to Larissa Harrison. "The hats are something I do when I'm too tired to work on an intricate project. It takes me about a week to make an octopus,” said Harrison

The octopus, as cute as it is, is also safe.

"The baby grabs on to the tentacles of this and it keeps them away from pulling out tubes that they're hooked up to,” said Director of Volunteer Services Jane Morrow. Jane also says that the nurses at Sanford get equally excited on their delivery day. "They have a lot of hats to pick from which is fun for them. To find a pink one or a camouflage one, they have a lot of fun picking them out,” said Morrow. Oliver Stenberg got one of the camo hats. Mom Jodi loves it as much as he does.

"Very thoughtful just taking the time and effort just to do something as little as a hat,” said Stenberg. It's the call to volunteering that keep each group going. "Almost every crafter's life, you reach the point where you've gifted everything you can. So you need to find a good outlet,” said Harrison.