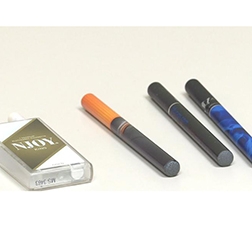 It's a fact that cigarettes are bad for your health, but the impact of the electronic cousin e-cigarettes is a little hazier. E-cigarettes have fewer chemicals than tobacco but a new study shows that teens using the electronic version are more inclined to move on to the real thing. They're popular because they're safer than traditional cigarettes.

"It's pretty much like a safer way than smoking cigarettes. You're not getting all the nicotine in it. It's actually supposed to help you quit smoking,” said Ryan Loeb, owner of Tokes “R” Us in Bismarck.

But a new study shows e-cigarettes don't lower the smoking risk, it increases it.

"For every one person that tries to quit smoking, you actually have three or four people that start using e-cigarettes which eventually lead to regular smoking of regular cigarettes,” said CHI St Alexius Respiratory Therapist Rajean Backman. A first of its kind study just published in PLOS ONE found that in the U.S. in 2014 about 2,000 adults were able to quit smoking with the help of e-cigarettes. But it also found that 168,000 teens and young adults went from electronic to regular. While there are fewer chemicals it's still not clear on what damage is being done to the body.

"Until they do the studies and the FDA says that it's one of the approved ways of cessation, it is not recommended,” said Backman. That recommendation could change as more studies are done. The study added that 1.5 million years of life would be lost by using e-cigs.