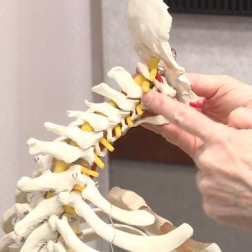 Texting, playing games, reading emails - all of those can now be done on your phone. As we use phones more and more, we're actually changing the human body, and bringing new problems with it. If you've ever been sore after a long day on your phone, you could be developing "Tech Neck.” Smartphones contain a person's life in a hand-held device. That takes up more of their free time.

"Depends on how boring the classes are. I don't know, five hours throughout the whole day,” said BSC student Scott Simenson.

"In total, maybe a couple hours,” said BSC student Louis Brown. Doctors say the more time people spend hunched over their phones, the more neck and spine problems they could have down the road.

"It's an overuse syndrome that we see due to poor neck posture and position,” said Connie Kleinjan, PT with CHI St. Alexius in Bismarck. The average head weighs about 10 pounds and medical experts say the neck muscles weren't made to hold the head in a forward position for extended periods of time. Kleinjan says she's seeing an increase in premature spinal degeneration, arthritis and issues with discs.

"Early intervention is the key to preventing long term neck issues, and just working out of bad habits that we've come into,” said Kleinjan.

When strengthening and stretching aren't enough, Kleinjan uses traction to help. Brown says he'll try and fix his posture now. "Maybe instead of hunching over and looking down at it, I'll hold it more in front of my face or something like that. Who knows if I'm going to remember to do it I mean it's kind of an old habit,” said Brown. This will hopefully help in avoiding treatment later in life. A 2016 study found the average age a child gets their first smartphone is just over 10 years old. Meaning more people in the future may end up with tech neck.