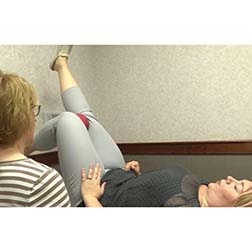 The American Academy of Pain Medicine estimates 100 million Americans suffer with some sort of pain. As doctors consider ways to help without prescribing opioids, a therapy known as postural restoration is gaining more traction. Lindsey Lee says she woke up one morning with considerable back pain. She wasn't sure how, but kept working and taking care of her toddler. That earned her a trip to the ER. Her treatment isn't what you'd expect, but Lee says her life is now pain free.

Breathing through a straw while holding a ball and one leg up in the air. It sounds like a party trick, but it's part of Lindsey Lee's physical therapy.

"As you progress, you kind of drop the easier ones off and kind of continue on with some of the more difficult ones,” said Lee.

To fix her back pain, Lee went to CHI St Alexius in Bismarck for postural restoration. Her physical therapist Connie Kleinjan says it's just retraining the brain. "What we look at is trying to inhibit or shut off certain muscles that are being over utilized and try to facilitate other muscles that are being underutilized,” said Kleinjan.

Rather than weights and medicine, Kleinjan uses straws, rubber balls and resistance bands. "If you take your car into get balanced and the tires rotated, we're trying to make sure that we're equalizing our body system from right to left, front to back so that we are working as efficiently as possible,” said Kleinjan.

It's already paid off for Lee. She says her pain is virtually gone, and she can walk and sleep again. "The big issue a lot of times is sleeping. So when you already aren't sleeping very well, life becomes challenging and so to be able to sleep through the night is very beneficial,” said Lee.

Now Lee is getting ready for the next part of her treatment. Lee said after two and a half months of working with Kleinjan, she's ready to start the transition to at home exercises.