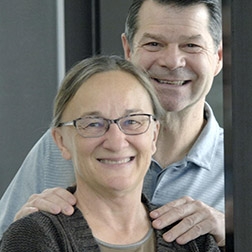 Laurie Chuppe, 58, had no symptoms that day. No chest pain. No shortness of breath. In fact, that day she had walked 5 miles in the Kirkwood Mall and also went to the gym. For the Chuppes, there was no indication anything was wrong. But at 3 a.m., Laurie Chuppe woke up and told her husband she wasn't feeling well. Minutes later, Greg Chuppe said his wife stopped breathing. "I started CPR right away, but I said her name and I think I said, 'Jesus,'" said Greg Chuppe, who rested a phone on his shoulder, talking with a 911 dispatcher, while doing chest compressions. "Even though she didn't have a heartbeat, it was like I knew this isn't how it's ending, but I knew I had to respond."

This Thanksgiving, Greg and Laurie Chuppe said they are thankful to be spending another holiday together with their children and many grandchildren.

Greg Chuppe, 58, a Bismarck chiropractor, learned CPR during his schooling, as well as through his clinic, Chuppe Chiropractic. Yet many people remain untrained and are unaware how to act in emergency situations, where every minute is critical.

Laurie Chuppe is grateful her husband reacted. Now, the two are advocating for more people to learn CPR.

"You don't ever think you're going to use it," Laurie Chuppe said. "Of course, you hope you don't have to."

According to Dr. Boban Mathew, a cardiologist with CHI St. Alexius Health's Heart and Lung Clinic, the survival rate for a person who has a cardiac arrest outside of a hospital setting is about 10 percent to 15 percent. And the chance is dramatically increased if the person gets CPR while waiting for first responders, he said. A heart attack is different from cardiac arrest. A heart attack occurs when a part of the heart doesn't get enough blood, while cardiac arrest happens when the heart suddenly stops pumping blood. A cardiac arrest can be a complication of a heart attack or can occur without one.

Laurie Chuppe doesn't remember much from the day she went into sudden cardiac arrest, nor the days leading up to it. Greg Chuppe did chest compressions for about 7 minutes until first responders arrived with an automated external defibrillator, or an AED. She was taken to CHI St. Alexius Health in Bismarck, where she "coded" or lost her pulse again, and had three stents placed in her heart. After that, her doctor used therapeutic hypothermia to cool her body down to attempt to reduce brain damage. She was in a coma for 36 hours.

Greg Chuppe isn't sure what went through his mind when he immediately acted.

"I knew it was a critical situation, but I fully expected her to be OK," Greg Chuppe said.

"He said it never crossed his mind that I might not make it. I don't know if it was your faith in God," Laurie Chuppe said.

"I just had faith that she was going to come out of it," Greg Chuppe said.

Laurie Chuppe was hospitalized for seven days, but has since made a full recovery and quickly returned to work. "It's amazing. I personally couldn't fault anyone, because I don't know how I would do. Especially if it's a loved one. I think sometimes you go into panic mode," she said.

Greg and Laurie Chuppe have purchased a personal AED, that Greg Chuppe said he'll carry around with him, even when he's hunting in the Badlands.

"Heart disease is the No. 1 killer in the United States you're going to be around someone or know someone who's going through it. It is going to happen at some point," Greg Chuppe said.