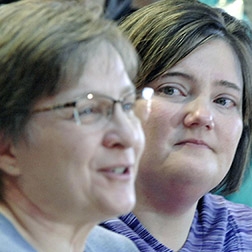 'We're a family': Community remembers those lost in air ambulance crash near Mandan

Members of the Bismarck and Mandan community began pulling together once the names of three of their own killed in a plane crash were released. Memories of Todd Lasky, of Bismarck, Bonnie Cook, of Bismarck, and Chris Iverson, of Mandan, were evoked and shared by those who knew them.

Lasky was a Bismarck Air Medical pilot, while Cook was a neonatal intensive care unit nurse with CHI St. Alexius Health Bismarck, and Iverson was a paramedic with Metro Area Ambulance.

Todd Porter, director of Metro Area Ambulance Service, said Lasky, who had previously worked for Bismarck Air Medical, had returned to the air ambulance service in June after time as a commercial pilot.

"He was a great guy, dedicated, professional pilot that was always there for us and always ready to step up and take the next mission," Porter said.

Jon Ternes, Bismarck Air Medical's director of operations, met Lasky about three years ago, and said he was "a bit of a motorhead" who liked to build custom bikes and owned Year Round Recreation, a power sports and small engine repair shop in Bismarck. Ternes also said Lasky picked up a "pep in his step" last summer when he met his girlfriend. While he could be stern at first, Ternes said Lasky always warmed up with a good joke.

"He normally wouldn't start off warm but, once the second you got a joke on him, he wouldn't let you forget that he owed you one for it," Ternes said.

Iverson became a paramedic for Metro Area Ambulance Service in early 2016, according to Dan Schaefer, the organization's operations director. Schaefer said Iverson enjoyed being a paramedic because he liked taking care of people and the diversity of EMS work, according to Schaefer.

"There's no such thing as a textbook call, and he loved that part of it, that's another reason why he liked flying, as well, because he was able to test himself a little bit and there was always some excitement," he said. Iverson was "as honest as the day is long," Schaefer said, and he always put his coworkers at ease and made them laugh.

"People that worked with him absolutely loved him. I know that my stepson got to do a ride along with him and he just absolutely thought he was a million dollars, he just loved him," Schaefer said. Iverson started working for Jamestown Area Ambulance in 2012, and he worked there part-time up until this year, according to Ken Krupich, general manager for Ringdahl EMS, the parent company of Jamestown Area Ambulance. Krupich said a 10-member crew met Monday night to share stories about Iverson and to help with grieving. "When you get into these small EMS communities, we’re a family and so everybody looks out for each other," Krupich said. Overall, crew members spoke about how Iverson always had their backs and showed tough love.

"He had such a strong passion for EMS and the patient care side of it," Krupich said.

When Sarah Walz was facing cancer while pregnant, it was her sister, Bonnie Cook, who was with her at Mayo Clinic. Walz was undergoing a seven-hour surgery and counted on Cook, a neonatal nurse by trade, to make the medical decisions for her son, Wyatt, as he was born.

“So we’ve always had a special bond,” Walz said.

Wyatt is now 4 years old. “He thought the world of Bonnie,” Walz said. In fact, Cook was reading a book to Wyatt at Walz’s home outside Mandan when she got the call Sunday for the flight.

Walz said the plane passed near her home and she believes it was Cook’s way of saying goodbye to the kids.

“Bonnie will always be with us,” Walz said. “She will live on with us. She was our rock.”

The oldest of 15 children, Cook held her siblings together. “She did everything for everybody,” Walz said. “There wasn’t a single person she did not like. And that’s just how we want her to be remembered. She just did what she had to to care for people.”

Cook enjoyed spending time with family, quilting and doing crafts. “She had so many talents,” Walz said, and Cook was passing those talents on, teaching Walz’s daughter to crochet. In lieu of flowers in Cook's memory, her family asks donations be directed to the betterment of the CHI St. Alexius NICU.

The family is inviting the community to a bereavement gathering and luncheon Friday to mourn and share stories of Cook. The gathering starts at 10:30 a.m. at Messiah Lutheran Church in Mandan, 1020 Boundary St. N.W.

Nellie Blotter, clinical coordinator for the CHI St. Alexius NICU, said Cook was with the hospital's NICU for more than 28 years, part of "a NICU family." Cook was married with children and was active outside of work, involved in groups for quilting and woodcarving. She was opinionated, Blotter said, but it was worth seeking her views, agree with her or not.

"She was a fantastic motivator," Blotter said. "She always had bright ideas and suggestions when you were stuck on a problem." Blotter also said nurses current, former and retired have come together since Monday in remembrance of Cook.

"One of my nurses said to me in regards to counseling, she said 'This is what we need, to be together,'" Blotter said. Angie Fleckenstein, who retired in 2017 after 35 years as a NICU nurse, oriented Cook when she started. She said her niece called her the best nurse she ever had "by far" after Cook cared for her in labor, delivery and NICU.

"I don't think you can get a higher tribute than that," Fleckenstein said.

Bonnie Cook was in the room the day Julie Fettig was first able to hold her newborn daughter, providing the same reassuring presence she had the first day in the delivery room. Julie Fettig’s daughter, Brooklynn, and her twin brother, Blake, came a little early - 35 weeks. It was Cook who rushed Brooklynn to the neonatal unit.

“She helped save Blake and Brooklynn’s lives,” Julie Fettig said. It was more than 24 hours before Julie Fettig, a first time mother, was able to see her children due to her own health complications. Cook kept her calm, coming to her with updates on how they were doing. “The way she took command of the NICU, it was just flawless how she handled things,” said Brad Fettig, Julie’s husband.

The twins spent 2½ weeks in the NICU and the Fettigs saw Cook everyday. She taught the new parents how to change diapers, how to feed the babies’ developing bellies and how the oxygen machines would work when they first got to take them home. It was Cook’s bubbly, laughing nature that lightened the mood for the stressed and worried parents.

“She truly was our angel,” Brad Fettig said. “And I’m sure ours is just one of thousands of stories.” That following October, the Fettigs took their twins to Cook’s home down the street for Halloween - Brooklynn dressed as a ladybug and Blake dressed as a monkey, complete with banana.

“She welcomed us all the way in to her kitchen,” Brad Fettig. “It was almost like you became part of the family.” The Fettigs thank Cook for their two healthy and rambunctious 4-year-olds. The pair are best of friends who enjoy playing with their younger brother, Brody, Julie Fettig said. Brooklynn is like a “mother hen” and Blake “can talk your ear off,” she said.

“She was one of the best nurses I’ve ever met,” said Julie Fettig, and the couple hopes Cook’s family might find some comfort knowing her life will have a lasting impact on all their lives.