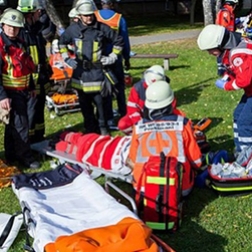 Mass shootings are becoming commonplace. This year alone, over 300 mass shootings have taken place across the country. That is why hospitals are doing their best to prepare. In what was a riveting presentation about 100 students and medical professionals packed into the Boniface Auditorium at CHI St. Alexius this morning to learn how to act, and possibly save additional lives when terror strikes.

16 months ago Dr. Kevin Menes was your normal doctor of emergency medicine working at Sunrise Hospital and Medical Center in Las Vegas but his life was changed forever the night of October 1, 2017, when Stephen Paddock opened fire on tens of thousands of concert-gores just down the street from his hospital.

In the hours that followed, Menes and his team would treat over 200 victims for gunshot wounds.

Those in attendance this morning heard the amazing story, about the steps he and his coworkers took to save as many lives as possible on that horrible night. He tells KX News since then, he's dedicated his life to teaching others in the medical field what to do and how to act in such chaotic situations...

"So I go around the world trying to teach how we could potentially save everybody in a mass casualty event, so that people don't have to die at the hands of a crazed, lunatic," said Dr. Kevin Menes.

Menes tells KX News a mass casualty event is any event where there are more victims than available individuals to treat them...it can range from two, to thousands.

Doris Weiss is the safety and emergency manager at CHI St. Alexius Health...it's her job to make sure things go smoothly if terror strikes Bismarck, she says this was an eye opening experience.

"I'm going to go back and re-evaluate our plans, I think a lot of those suggestions that he put in place there, would be quite beneficial here because they handled a huge amount people with a small amount of employees, and those are the same situations we're facing here,” said Doris Weiss, Safety and Emergency Manager with CHI St. Alexius Health.

Some of those suggestions included keeping security tight to make sure no shooter can enter the hospital and kill additional victims as well as grouping the victims by the severity of their injuries. Students in attendance say they learned quite a lot from the presentation.

"It actually blows my mind, I came because I was interested because I actually had some friends that were at the incident and it all blew my mind to see all the behind the scenes of it, because you hear about all the people that were saved and everything that happened and it's just crazy to me to hear how he handled it all,” said Taylor Vorkman, a senior respiratory therapy student.

Menes spoke to the crowd for over two and a half hours and had the complete attention of the audience, one that certainly hopes to never be in the situation he was in...but if they are, he hopes they can take lessons learned to save just one more life.