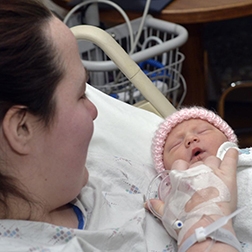 Finlee Elizabeth came into the world at 12:13 a.m. New Year's Day. The first baby born in this year in Bismarck, the little girl weighs 6 pounds, 15 ounces and is 22 inches long.

"I loved the name Finlee since I was a little girl," said mother Michele Kowalski, of Wishek. Kowalski spelled Finlee with two e's at the end after Finlee's grandpa, Lee Kowalski. "She hardly makes a squeak," Kowalski said of her contented newborn. "She's a very good baby." And Kowalski would know. Finlee is her first child but she's an aunt to her brother and sister's six children. "She's got a lot of auntie practice under her belt," said her sister, Theresa Hagen.

Hagen and Kowalski's mother, Cathy Kowalski, were with her during 24 hours of labor and an emergency C-section. "She was literally waiting to be the New Year's baby," Cathy Kowalski said of her newest granddaughter. Cathy Kowalski's advice to her daughter on being a mother: "Do your best, be yourself and things will fall into place. And love unconditionally. "She's about to find out what that is,"

Cathy Kowalski said of her daughter. "I know she's going to be a good mom."

From her own mother, Michele Kowalski said she has learned dedication. "She does a lot. She really puts us first," Kowalski said and she's excited for the chance to do that for her own daughter.