Burleigh County is an opioid hot spot for injured workers 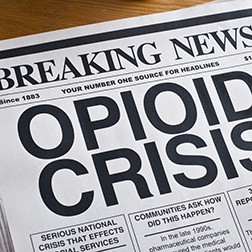 Prescribers in the county, which includes Bismarck, have accounted for half or more of all opioid prescriptions paid for by Workforce Safety and Insurance (WSI) for more than a decade, far surpassing the amounts for other counties, according to reviews of the agency that examined narcotic use. Last year, for example, narcotic painkillers prescribed by providers in Burleigh County totaled more than $1.5 million, or 53.7 percent of total opioid prescriptions paid for by WSI, a state-run insurance program for injured workers.

By comparison, the workers’ compensation program spent $223,264 on opioid prescriptions last year in Cass County and $229,613 in Grand Forks County.

In 2005, the first year opioid use among workers covered by WSI was tracked, Burleigh County accounted for 48.8 percent of total spending on narcotics. Narcotic painkiller prescribing practices have fallen under increased scrutiny in recent years because of the opioid epidemic, and a state law passed in 2015 seeks to limit opioid use in a variety of ways among injured workers.

Statewide, opioid prescriptions peaked in 2015, and have since declined, according to the database of reportable drugs that is managed by the North Dakota Board of Pharmacy. Among North Dakota’s four top urban counties, Burleigh’s opioid prescription rate stands out at almost twice that of Cass County, according to the statewide drug monitoring database.

Opioid prescriptions as measured by pills per person yielded a rate of 8.17 in Burleigh County during the third quarter this year, compared to 6.52 in Grand Forks County, 5.16 in Ward County and 4.39 in Cass County, according to the state’s prescription database.

Bryan Klipfel, director of WSI, said the agency can’t explain why Burleigh County persists in such high narcotic prescription levels, “other than there are a number of large prescribers in this area.”

In 2010, an evaluation of WSI flagged Burleigh County’s high narcotics usage. Consultants found that the top five prescribers statewide were from the Bismarck area, and the top prescriber dispensed 40 percent more prescriptions than the next highest. The top five prescribers, the consultants noted, were in the specialties of physical medicine and rehabilitation as well as anesthesiology.

“WSI has engaged in numerous interventions with the largest prescribers, but the data reveals change has been slow,” Klipfel said in a statement.

At Sanford Health, the number of opioid prescriptions in the Bismarck area has decreased 22 percent since early 2016, and the number of opioid pills has decreased at a similar rate, said Dr. Chris Meeker, chief medical officer for Sanford Bismarck. Sanford’s Fargo service area, however, has shown a much steeper drop, he said, with a 34 percent decrease in opioid prescriptions and a 47 percent decrease in opioid pills during the period.

Measures to reduce narcotic painkiller use include referrals to physical therapy or behavioral health therapists, who help patients cope with chronic pain, Meeker said. Fargo has more in the way of medication-assisted therapy to wean patients off of opioids and behavioral health services, he said.

“There’s no question that the amounts have been decreasing, to the tune of 30 percent dispensing,” he said. “You’ll continue to see it going down.”

Neither Meeker nor Horner had a breakdown for WSI patients, and said they did not know if that population of patients was different than patients at large.

Mid Dakota Clinic in Bismarck did not provide information on its current or former opioid prescribing rates, but issued a statement saying its providers “assess each patient’s need and carefully prescribe in a way that addresses acute pain in limited prescription quantity, and chronic pain with either watchful oversight in combination with patient education or referral to pain specialists for ongoing pain management.”