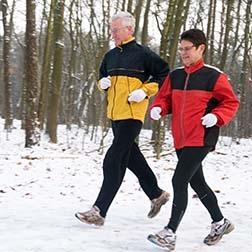 When Baby Boomers moved through adolescence 50 years ago, they watched their parents and grandparents age and nursing homes fill with people suffering from arthritic conditions. Now as Boomers hit their 60s and 70s and their own joints ache and body parts wear thin, medical advancements are allowing them to stay active and continue a high quality of life.

Boomers account for nearly 40 percent of all total knee or total hip replacements in recent years due to improvements in materials, surgical technique and pain management. While they obviously seek pain relief, their biggest motivation is to get back to biking, golfing and their aerobics class.

“Baby Boomers want to stay active, and to a large degree we can meet their demands,” said Tim Bopp, CHI St. Alexius Health Bone and Joint Center orthopedic surgeon. “They are high demand people and they tend to take whatever we do and test it to the limit,” Bopp said. “Twenty years ago when I did a knee replacement, I wouldn’t dream of letting people go downhill skiing. Well, today, we do allow people to go downhill skiing, but they have to tone it down. They have to use some common sense because there’s still a limit to what we can do.”

In the mid-1970s, knee and hip replacements were in their infancy. The risks were high, and complications were common. It involved a two to three-week hospital stay and patients were confined to bed for at least the first week.

“The surgery itself has evolved a little bit, but the basic idea of taking out something that is worn out and replacing it with artificial parts - that really hasn’t changed,” Bopp said. “But the way we do it is friendlier to the muscles and tendons, and more bone-sparing.”

Having made strides over the years with pain management and pre-operative education, joint replacement surgeries are on the rise. In fact, total hip replacements are expected to increase 19 percent over the next five years and a whopping 74 percent in 10 years while knee replacements are even higher at 28 percent and 89 percent, respectively, according to national forecasts. Locally, Raumi Kudrna, CHI St. Alexius Health Total Joint Program director says knee and hip replacement surgeries have increased 20 percent in the last four years.

“People are more active, so there is more wear and tear, which means there’s a greater need,” Kudrna said. “And because we’ve become so efficient and people can have the procedure and rebound so quickly it is a much more viable option.” Most patients at CHI St. Alexius only stay in the hospital about six hours beyond surgery, with 23 percent of all total knee/hip replacements discharged the same day. More than 94 percent of patients report satisfactory pain management following the procedure.

Dr. Bopp has seen a lot of improvements over the last decade with joint replacement surgeries, namely because it has transitioned to be a team effort between the hospital staff, the surgical team, the post-op team, and especially the pre-op education team.

“It’s a long process,” Bopp said. “When I see the volume of people in my clinic, I don’t have two hours to spend with each one, but they need two hours of education.”

Johnson leads the education aspect for patients, providing classes and an online program that allows medical staff and the patient to check in with each other so surgery and post-operative expectations are clear, particularly in regard to pain management.

“If you go back years ago, we just gave people more drugs which made them more nauseated and sick and dopey and that was what often kept them in the hospital longer,” Johnson explained. “Now with the nerve blocks and injections, there are ways to manage pain locally instead of systemically through their whole body so we’re able to give them better pain medicine without the side effects we had to deal with years ago.”

Dr. Bopp admits that some of the more aggressive Boomers have unrealistic expectations when they walk into the office, saying some expect to be pain free and walking with no limp the following day.

“They have these expectations that are crazy, and you see it mainly in the Baby Boomer age group, so that’s an issue we deal with,” Bopp said. “They tend to try fads like stem cell shots or cartilage supplements hoping, looking, and dying for something to work for them. You didn’t see that in the previous generation.”

“As nurses, we have to reset expectations constantly,” Kudrna said. “We’ll say ‘You did just have surgery, we expect you to have pain, and so what’s tolerable?’”

For Bopp, part of being a physician is being compassionate in an effort to help people, but unfortunately, trying to meet unrealistic expectations turned into a slippery slope.

“We tried to set these people’s expectations to think they shouldn’t have any pain, so if they did, we’d give them Oxycontin and morphine and kept giving this stuff out like candy, and we got ourselves into trouble for that,” he said. “Our medical profession is being highly criticized – and rightly so – for doling out all this stuff because we were trying to meet unrealistic expectations that patients had, and part of the problem is we fed into that. Now we’re backpedaling, because having a little pain after surgery is not the end of the world.”

But one demand the medical community is trying to accommodate is more availability for surgery. Dr. Bopp’s volume of patients, combined with the efficiencies of today’s joint replacements, means what he used to handle in a month is now being done in the course of a week.

“When I first started, a really big day in surgery was four joint replacements, and I had one operative day a week back then,” Bopp said. “I will routinely do seven a day now, and I have two operative days, so that’s 14 surgeries - at a minimum - that I personally do just at St. A’s and that’s not even including the outpatient center. We were the only game in town in 1992 and that was the volume I had back then when we covered both hospitals. Now Sanford has their own set of orthopedic surgeons, and so do we, and we’re both as busy as can be.”