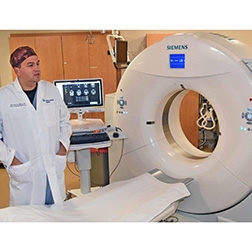 When Nicholas Bradbury was in medical school 15 years ago, treatment options were limited for stroke patients. When Bradbury went with a neurologist to visit stroke patients, they'd take note of the functions patients lost - such as vision or speech - and then put them on baby aspirin and that was it.

"That was all the treatment you had," said Bradbury, now an interventional radiologist at CHI St. Alexius Health in Bismarck. Over the past 10 years, treatment for stroke patients has changed drastically. Strokes occur when a clot gets stuck in a person's brain and blocks blood flow, which can cause brain damage, a long-term disability or death.

Since Bradbury's time in medical school, doctors have realized time is of the essence in the event of stroke, because certain treatments can only be offered with a certain time frame, he said.

The first treatment option is an injectable medicine that breaks down blood clots, which can only be used in the first four hours of a stroke. And then, up to six hours after a stroke, doctors can perform a clot-removal procedure called a thrombectomy.

Both treatments carry the risk of a brain bleed, if not offered within the allotted time frames, according to Bradbury. But it's often difficult for doctors to discern the onset of a stroke, considering 20 to 40 percent of strokes occur during sleep. With the help of new brain-imaging software developed at Stanford University, doctors at CHI St. Alexius can stretch that window of treatment to up to 24 hours. Bradbury called the software "a revolution in medicine."

"It really adds an option for treatment for a lot of patients who otherwise wouldn't have one," he said.

The software helps doctors identify who could benefit from a thrombectomy after the treatment window has closed. A patient gets a CT scan done and the software measures blood flow in the patient’s brain — resulting in a colorful image of the brain. Bradbury said the software calculates a ratio of how much of the brain is salvageable after a stroke. This information, that previously took hours, now takes a matter of minutes.

"There's still a chance of bleeding (in the brain), but we're doing this for patients who are going to lose their ability to live independently, and we have a chance to keep that from happening," Bradbury said.

The technology is still new to hospitals, and, CHI St. Alexius Health is the first hospital in North Dakota to acquire it. The Stanford software was used in two trials, and, as a result of those trials, the American Heart Association issued new stroke guidelines.

Also, the U.S. Food and Drug Administration approved the software last month, according to a news release from the company that developed the technology. CHI St. Alexius Health Bismarck Foundation provided a grant to purchase the technology, according to hospital spokeswoman Chelsey Kralicek.