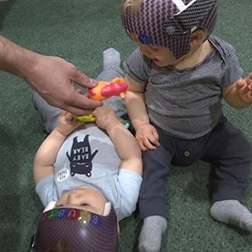 Any abnormalities in a child will be scary for a parent. There are a set of twins from Harvey who were born healthy, but who's heads began to flatten. Jordan Verdadeiro spoke with the family and a certified orthotist who is helping get these baby boy's head shape back how it should be. This is Bausten and Huxley, and these twins are in cranial remolding helmets. Their father, Cayle Paulson says they were born two months early.

"They spent their first five weeks in the NICU here in Bismarck, so through time at home and sleeping on their back, they slowly kind of developed a flatness on the back of their head," said Paulson. It's also known as helmet therapy, it's given to children who suffer from flattening on the occipital sides of their heads.

"You're alarmed and of course as a parent, you want to make sure you're doing the right thing."

Paulson says at first he didn't know if it was necessary but found it has been painless and protective.

"And once we get them into the helmet, as their head is growing at such a rapid rate it corrects inside the helmet," said Todd Jasper, orthorist at CHI St. Alexius. Jasper says if children aren't put in a helmet it could potentially worsen the shape of their head, or lead to other conditions down the road.

"Eighty percent of the cranial growth happens by one year, so we like to get them into a helmet between 4.5 and six months," he said. By using a laser scanning device, Jasper is able to review 3-D data that can be reviewed in multiple plains. "Most parents come back in one week and are pretty excited and say this isn't as bad as I thought and I could see a correction already."

Paulson says this has assured him and his wife they are doing the right thing to make sure their boys a perfect beginning.

Jasper says the scan takes about 1.5 seconds and the initial evaluation at CHI St. Alexius Health is free.