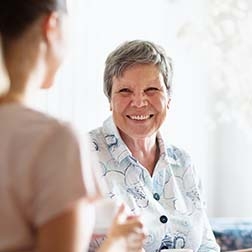 Even hospitals are concerned about the rising costs of inpatient care, as well as the ability of frail patients to transport themselves to health appointments. To better address patient needs, North Dakota-based CHI-St. Alexius Health System is expanding its palliative care program to include outpatient and home-based services.

The hospital’s inpatient palliative care team emerged from its hospice program beginning in 2013, providing symptom management to patients who had not yet received a terminal diagnosis. The program picked up extra steam after the hospital began pursuing participation in the American College of Surgeons’ Commission on Cancer program, as well as other certifications such as trauma care, for which palliative care was a benchmark.

“For years the hospice team would talk about how they wished they could help a patient who was not yet terminal. Many patients could benefit from palliative care, but at the time we had no way to serve them,” Laura Archuleta, MD, the program’s medical director, told Hospice News. “Now that we are expanding into the home, it was again about seeing where the need really lies. The inpatient program was a great start, but patients were being discharged just as we were getting to know them. We knew we needed ambulatory and home-based options to continue the work.”

The hospital opened an ambulatory palliative care clinic to help continue the relationship with patients post-discharge. In the clinic patients have discussions with nurse practitioners and nurses about their goals for care and receive symptom management such as treatments for pain, nausea, insomnia, anxiety, and other sources of discomfort.

But they soon realized that the outpatient clinic wasn’t reaching some of the system’s most vulnerable patients.

“Often our most medically frail patients were unable to leave the house to get to another doctor appointment, or they are so burdened with going to chemotherapy, going to dialysis, or other appointments that coming in for palliative care felt like too much,” Archuleta said. “It’s also been very educational for us. You get a whole different understanding of a patient when you see them on their own ground and can really see what resources they have and what they are up against.”

The program contracts with three area nursing homes and a number of assisted living facilities to provide palliative care on their campuses.

In current markets, a profitable palliative care program is nearly unheard of, according to Archuleta, but the return on investment comes from cost avoidance: reduced hospitalizations and readmissions, reduced emergency department visits, decreased length of inpatient stay, and providing preventive care than can stave off a crisis. The palliative care program also creates efficiencies for physicians, discharge planners, and other hospital staff, Archuleta told Hospice News. Improvement in patient satisfaction scores, which can affect hospital payments, is also a significant organizational benefit of palliative care programs.

The most significant barrier the program has encountered is a pervasive issue throughout the palliative care space: Lack of awareness, even among many of the physicians that could refer patients to the program. Many patients, families, physicians and other health care stakeholders conflate palliative care with hospice.

“There is that barrier of understanding, with some physicians afraid that a referral to palliative means sending a non-terminal patient to hospice. We do a lot of pavement pounding and shaking hands to help dispel that misperception,” Archuleta said. “We focus on quality of life and a customized treatment plan, but we do that while you are continuing your other course of treatments.”