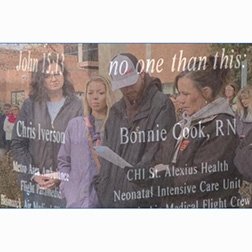 It's been one year since three first responders on an errand of mercy died in a plane crash in Morton County. Many are still wondering how the plane broke apart in the air. The National Transportation Safety Board hasn't released its final crash report. Last year in its preliminary report, the NTSB confirmed there was no explosion or plane fire. The wreckage was scattered for nearly a mile. CHI St. Alexius honored the three victims alongside family and friends with a monument on the outside of the south entrance of the hospital.

Monday morning many of the victims loved ones were here to be a part of the blessing. An emotional day of remembrance.

"And everybody can feel it. But yet we also look at it as a milestone. We got here and now we can move on and continue to grow and heal," said Dan Schaefer, Metro Ambulance director. He says it doesn't feel like it's been a year since they lost their friends and loved ones.

"You learn to live parallel with that grief. It's right here. It's always around you. But I trust God. I trust in the journey. It's not just about my journey, it's about all of our journeys," said Bonny Senger, Todd Lasky's fiancée. Pain and a knot in the stomach that doesn't ever really go away.

"Mom lived a great life. She touched the lives of a lot of people. And at some point everybody has to go. And, if I can impact as many people as she did, life would be great," said Pam Cook, Bonnie Cook's daughter.

Grief and emotions coworkers also had to battle. "It's been an interesting year. This day marks an anniversary where one year today we lost three wonderful people, our heroes. Truly been a struggle. At times with the loss of anyone much less coworkers that you work so tightly with," said Schaefer.

Schaefer says they've had to lean on the Bismarck chaplains for support. Their end of watch may have been a year ago but their legacy’s live on within all first responders and the community. This memorial serves as a quiet place for anyone to remember and honor Bonnie, Chris and Todd. Metro Ambulance is also making a memorial that will be at their south location on Memorial Highway. Many say the final crash report will be like closing a chapter but their real focus is remembering their loved ones for all positive things they did for the community they served.

The three would be lost when their turboprop plane went down outside of Mandan in the late-night hours of Nov. 18. It was determined through a preliminary investigation by the NTSB that the plane climbed to 14,000 feet traveling at around 270 mph. At some point, radar contact was lost and the plane broke apart and crashed into a field near Harmon.

“Bismarck Air Medical?, Chris, Bonnie, Todd?, Please respond,” said the dispatch center. Monday marked one year since that fateful day, and friends and family members of the victims gathered at a newly established memorial space here on the CHI St. Alexius Campus to remember those lost.

“Just as we remember Jesus’ willingness to give his life for us, we remember Bonnie, Tod and Chris’ willingness to fly into the night to care for a baby in need,” said Sister Mariah Dietz, Vice President of Mission Integration at CHI St. Alexius Health. At the time of his death, Todd Lasky was engaged to Bonny Senger, who told KX News she thinks about Todd every day and still has so many questions. “I wanna know what the hell?, I wanna know why a plane, why the right-wing would just break off? I mean, what the heck. And did they suffer? was it instant? Did they just pass out? I want to know those things because I have bad dreams, I still have bad dreams,” said Bonny Senger.

Nellie Blotter was a good friend of Bonnie Cook’s and told KX News the world lost a wonderful person. “If you didn’t know Bonnie, you didn’t know that she was very enthusiastic, loved life, loved doing new things, learning new things, passing that onto others. She was a mom to a lot of people,” said Nellie Blotter, Clinical Supervisor, Newborn Intensive Care Unit at CHI St Alexis.

Around 200 people attended Monday’s service, many knew those who lost their lives, some didn’t but felt it was important to pay their respects. The memorial will serve as a place to remember those lost, assuring their memory and legacy doesn’t get lost in time.

Three people who died in the crash of an air ambulance in Morton County a year ago were remembered Monday in two private ceremonies. CHI St. Alexius Health unveiled a monument memorializing hospital nurse Bonnie Cook, 63, Metro Area Ambulance paramedic Chris Iverson, 47, and Bismarck Air Medical pilot Todd Lasky, 48. The three-sided granite obelisk is engraved with the names of the victims. Metro Area Ambulance in a separate ceremony unveiled a temporary marker where a permanent memorial will be placed outside of its building.

The three people were on their way to pick up a patient in Williston on Nov. 19, 2018, when the twin-engine airplane they were in crashed in a field about 20 miles northwest of Bismarck. Wreckage was scattered over an area 1 mile long and 600 feet wide in a snowy field northwest of Harmon Lake in rural Morton County.

The Sheriff's Office, Civil Air Patrol and Air Force Rescue Coordination Center based at Tyndall Air Force Base in Florida located the crash scene early the next day. An analysis by the Air Force team indicated the Cessna 441 turboprop might have broken up at about 14,000 feet. The plane sent out no distress signals.

The National Transportation Safety Board is still investigating the cause of the crash. The board's preliminary report, released two weeks after the crash, ruled out a fire or explosion. Authorities have said the plane was not struck by anything, and weather is not believed to have been a factor.

About 150 people turned out for Monday's memorial events.