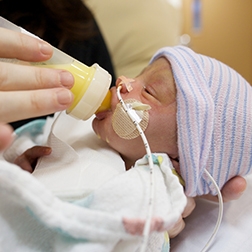 CHI St. Alexius Health, one of the largest Level III neonatal intensive care units (NICU) in the state, anticipates improved outcomes for the extremely premature infants with the introduction of an exclusive human milk diet (EHMD)[i] featuring nutritional fortifiers made from 100 percent donor breastmilk instead of cow milk. Keeping extremely premature infants off cow milk-based nutrition has shown to reduce complications[ii], improve health and reduce the length of stay[iii] in the NICU.

CHI St. Alexius Health has been a trailblazer in improving the standard of care for preemies and is the first hospital in North Dakota to adopt an EHMD, which comprises moms or donor milk and nutritional fortifiers from Prolacta Bioscience.

When used as part of an EHMD, Prolacta’s fortifiers are clinically proven to improve health outcomes[v],[vi],[vii]and reduce hospital costs3,[viii] for critically ill, extremely premature infants in the NICU weighing less than 2 lbs. 12 oz. (1,250 g) at birth as compared with cow milk-based fortifier or preterm formula.

“We are thrilled to be the only hospital in the region to offer an exclusive human milk diet to all of our tiniest patients, our NICU babies,” stated Nellie Blotter, CHI St. Alexius Health’s NICU Clinical Supervisor. “Research shows fewer complications, which contributes to shorter NICU stays for our patients. I look forward to helping more babies go home sooner and healthier from our NICU.”

In addition to providing the added nutrition preemies need, Prolacta’s fortifiers are the first and only to contain the full spectrum of mother-made human milk oligosaccharides (HMOs) — special sugars found in high concentrations only in breastmilk that serve a predominantly prebiotic and gut maturation function in the newborn gut.[ix],[x] HMOs may be the “secret ingredient” giving breastmilk its myriad health advantages beyond simple nutrition.

[i] An exclusive human milk diet (EHMD) is achieved when 100% of the protein, fat and carbohydrates in an infant’s diet are derived from human milk. This diet includes a human milk-based human milk fortifier.