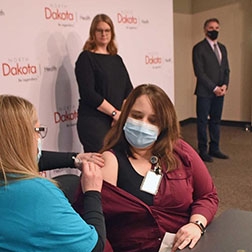 Active cases of COVID-19 in North Dakota dropped below 3,000 on Wednesday, and coronavirus-related hospitalizations plummeted to their lowest level in nearly two months, in large part due to what state officials said was data catch-up following a recent surge in cases. Hospitalizations plunged from 277 to 160 -- a one-day drop of 42%. But about half of the hospitalizations whose status was changed involved discharges before Dec. 1, according to the Department of Health. Disease Control Director Kirby Kruger cited case workers catching up, a lag in reporting and "inconsistent" data entry.

“The team took time yesterday to verify every individual currently marked as hospitalized and found a number who had been previously discharged,” Kruger said. “In the future, the team will be working more actively with facilities to ensure the information is up to date and accurate.”

Meanwhile, vaccinations continued in North Dakota, where the Pfizer vaccine began arriving Monday. As of Tuesday night, 831 doses had been administered to health care workers, according to State Immunization Program Manager Molly Howell.

"This is a historic week," Gov. Doug Burgum said during a coronavirus briefing that involved the public vaccinations of Dr. Laura Archuleta, a CHI St. Alexius Health family physician, and Alena Goergen, director of nursing at Miller Pointe care facility in Mandan.

Health officials on Wednesday reported 304 new COVID-19 cases, including 44 in Burleigh-Morton counties, raising the state's pandemic total to 88,686, with 84,535 recoveries. The state's definition of a recovered COVID-19 case is one in which the person is out of isolation and no longer contagious, according to health department spokeswoman Nicole Peske. A "recovered" person could still be having lingering health issues. Active cases statewide on Wednesday dropped to 2,956 -- 71% below the recent high point reported on Nov. 22. Some health experts and state officials credit a state-imposed mask mandate and business capacity restrictions; others consider those measures an infringement on personal freedom. The health department reported 24 more coronavirus-related deaths, raising North Dakota's pandemic death toll to 1,194. The new deaths included five in Burleigh County.

"With hospitalizations going down, we all pray the deaths will also follow," Burgum said, adding that new antibody therapy treatments also are becoming available for COVID-19 patients.

The Associated Press reported that the state’s death count is ranked 41st in the country but is the fifth-highest per capita, at 152 deaths per 100,000 people, according to figures compiled by The COVID Tracking Project. Hospitals in the state had 30 staffed intensive care unit beds and 315 non-ICU beds available, according to the most recent state data. In Bismarck, Sanford Health had four staffed ICU beds open and and CHI St. Alexius Health had two. Sanford had eight staffed non-ICU beds and CHI St. Alexius had 16. The new health department data was from 4,917 tests processed Tuesday. Burgum acknowledged that daily testing has dropped off - it was double Tuesday's total just a few weeks ago - but added "Just because our numbers are dropping doesn't mean that there aren't asymptomatic spreaders out there."

North Dakota's positivity rate rolling average as calculated by the state over the last 14 days also has dropped by more than half, to 7.3%, according to Burgum. The goal remains to get it below 5%, which Burgum acknowledged could be a challenge as people gather in the coming weeks.

"We need to be thinking collectively of how can we get this number down under 5% and deal with the holidays," he said. "If we can do those things simultaneously, that'll be another major victory for us."

The state expects to receive an initial 13,200 doses of the Moderna vaccine next week, Howell said Wednesday. That vaccine awaits approval by the federal Food and Drug Administration. A panel of outside experts is expected to recommend the formula on Thursday, with the FDA's green light coming soon thereafter. North Dakota’s top health official expects the first-priority groups to be vaccinated by early January. The vaccine ethics committee on Monday recommended that older adults, people in congregate living settings and those with underlying conditions be prioritized in the second phase. The state’s COVID-19 Unified Command and the governor's office need to sign off on that. The decision isn't likely to be made until next week at the earliest, according to Howell.

Vaccines for the general public aren’t expected to be available until the spring. Burgum, Lt. Gov. Brent Sanford and North Dakota's legislative leaders on Monday said they plan to take a COVID-19 vaccine when available for them. "I don't have any underlying health conditions and I don't have any age vulnerabilities and I'm not a health care worker, so I'll be in line, way down the line, I guess, in terms of eligibility to receive the vaccine," Burgum said during a panel discussion of the Fargo-Moorhead-West Fargo Chamber of Commerce. "But when the day happens, I'll be happy to roll up my sleeve and get a vaccine, because these vaccines are safe, they're effective."

Wilke said the Moderna vaccine likely will go out to rural areas, as it doesn’t require ultra-cold storage, has a longer shelf life and comes in packages of 100. “It is a little bit more user-friendly vaccine,” he said. The Pfizer and Moderna vaccines are given as two shots, administered weeks apart. The federal government will do direct shipment and delivery of vaccines to different locations, Wilke said. North Dakota’s Department of Health will break up vaccine packages, if necessary, and then distribute those doses.

The governor's office hopes to have a new state health officer selected by the end of the month, spokesman Mike Nowatzki told the Tribune. In-person interviews with candidates will be done this week or next, he said.

Wilke, the state health department's chief of staff, took over on an interim basis after Interim State Health Officer Paul Mariani resigned in September - the third person to quit the position since the start of the pandemic. His resignation after less than two weeks on the job followed the state’s decision to rescind a quarantine order for people who are close contacts of those who test positive for COVID-19. Wilke also had been appointed on an interim basis after Andrew Stahl resigned in August to reenter clinic practice after three months in the interim role. Stahl succeeded Mylynn Tufte, who quit as health officer in May to return to the private sector.

The statewide mask mandate is in effect until Jan. 18, and the business capacity restrictions are in place until Jan. 8. Violations could be punishable by a fine of up to $1,000. Repeat violations could lead to a fine up to $1,500 and 30 days in jail. For more information, click.

All North Dakota counties are in the orange "high risk" level on the state's five-level color-coded system. The risk level determines coronavirus-related protocols in place under the ND Smart Restart Plan for everything from businesses to family gatherings. Those protocols are not enforced.

Vaccine is “the encouragement that we need”

It’s a limited rollout of the vaccine, but a rollout nonetheless. Both medical and state leaders are imploring people to get the vaccine and get it quick. During Gov. Doug Burgum’s, R-N.D. weekly briefing, frontline health care workers received the COVID-19 vaccine and remarked on the role it’ll play in their lives and the lives around them. “This has been a very dark, depressing, hopeless time for many of my friends in the health care field. I’ve seen renewed excitement and energy in them over the past couple of weeks knowing that this vaccine is coming. This is the encouragement that we need to know that there is light coming at the end of the tunnel,” said Dr. Laura Archuleta, CHI St. Alexius physician and medical staff president.

State and health leaders say that the vaccine is the key to lowering hospitalization, which has already been trending downwards. The State Heath Department reported 117 fewer hospitalizations compared to their last report. However, they said much of it was caused by a catch-up by case workers after a surge in October and November put many case workers behind in updates. COVID-19 restrictions remain in-place for now, and that’s to keep hospitalization rates down during the holidays.

“We’re worried about all gatherings. Whether they’re in public establishments, public places, or in homes, because transmission can happen at any place. I think that traditionally in North Dakota, as North Dakotans we gather for holidays,” Burgum said.

On Thursday, the federal government is expected to review and approve the Moderna vaccine, which North Dakota has already ordered 13,000 doses of. While infection rates and hospitalizations are on the downswing, the death rates remain about the same. Burgum said with hospitalizations heading downwards, he prays death rates will follow. While trust in the vaccine is on the rise, there are still some who are reluctant, and Wednesday’s news conference was designed to help allay those fears. Health care workers were the first in line for inoculations, and those who received it said the vaccine rollout has given a new sense of optimism to their workers. Those in attendance Wednesday even said they got goosebumps.

For the past few months, hospitals and clinics have been, by their own words, overwhelmed by the demand for health care. The numbers, thankfully, are starting to go the right way, but officials are warning against getting complicit this holiday season before they get the vaccine.

“At Thanksgiving, we saw families taking different approaches, and I think the results of that are being shown in the decline that’s here. And so, as we head into the holidays... let’s keep the success going that we’re having being smart,” Burgum said.

The CDC recently shortened the quarantine period for travelers, just in time for the holidays. But doctors are continuing to push safety and caution, because the vaccine doesn’t reach full effectiveness for the public until at least 70% of people take it.