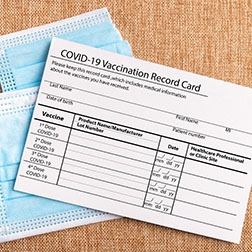 As more doses of the COVID-19 vaccine are being distributed, some health officials say fewer people are lining up for their shot. While nationwide hesitancy has become better, health officials say North Dakota is one of the states that are seeing an increase - which has an effect on the doses sitting on shelves.

“Obviously those that were affected by COVID, whether family members or working in different businesses or different healthcare or have seen the effects of COVID, are maybe a little bit more interested in getting the vaccine,” explained Sherry Adams.

Adams, who is the executive officer for the Southwestern District Health Unit, is out with her team across eight counties in western North Dakota holding vaccination clinics.

And she says it’s not just one group of people being hesitant.

“There’s still some concern out there. Some individuals are still saying, ‘I’ve had COVID and I can wait’ or ‘I don’t really need the vaccine, I’ve already had COVID so I should have immunity,'” said Adams.

Since President Joe Biden pushed for more allocations of vaccines across the nation, there is no shortage of doses - but there is a shortage of arms to put them into. “We’ve hit that point where everybody that was in such a hurry to get vaccinated has been and now it’s more the people that are kind of sitting on the fence waiting to make that decision. So that’s why we find ourselves with more than we expected,” said Joan Galbraith, the Pharmacy Quality and Clinical Research Manager for CHI. ST Alexius.

As the health department allocates doses on a weekly basis, they will shortly be switching over to order by demand, which would help with storage and not wasting doses.

“So once it hits us it can go in a regular freezer and it stays there for two weeks. So when we’re ready to use it then we pull it out. Once it hits the refrigerator then it’s only good for five days,” explained Galbraith.

The North Dakota Department of Health also received an update on variants in the state. 35 cases of not just one, but three different variants are now in the state.

“Most of them are the California variant, the United Kingdom variant, but we do have our first South African variant that was reported as well. These variants are in North Dakota. They are circulating,” said Kirby Kruger, the Section Chief of Disease Control for the NDDOH. Kruger says Pfizer has now proven to be effective against the South African variant.

While it is unknown at this time about the other strains and vaccines, he says the vaccine is still the most effective way to not contract or have a severe case of the virus.