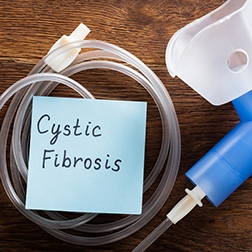 Cystic fibrosis (CF) is a difficult disease to live with but management is greatly improving thanks to recent medical advances.

CF is an inherited genetic condition that affects the lungs and digestive system of about 30,000 people in the United States. A genetic defect causes the body to produce mucous that is thick and sticky rather than loose and watery. Instead of sweeping out bacteria from the lungs, it can clog the lungs and lead to life-threatening infections, progressive lung damage and difficulty breathing. The mucus also blocks the pancreas, which prevents natural enzymes from breaking down and absorbing food.

How to manage cystic fibrosis

Living with CF requires daily management and a variety of therapies. Treatment may involve a combination of several medications, airway clearance techniques and pulmonary rehabilitation to improve or maintain lung function. There is no cure for CF so rigorous management of the disease is critical to prevent complications and slow its progression. Poor management can lead to recurring illnesses and infections, and progressive damage to the lungs.

Malnutrition is also an issue for people with cystic fibrosis because they tend to burn more calories due to poor digestion and the extra work required to breathe and fight infections. The Cystic Fibrosis Foundation reports that people with CF need up to twice the daily recommended calories of someone of the same age, height and weight.

One of the most difficult aspects of disease management is the need to perform airway clearance techniques, which reduces damage to the lungs by regularly clearing the thick CF mucus from the airways. This therapy takes up to 45 minutes and may be needed several times a day.

Treatment for CF is improving significantly, however, with the approval of a new drug in 2019 called Trikafta (elexacaftor/ivacaftor/tezacaftor) that targets the genetic mutation causing lung dysfunction. It the first triple combination therapy available to treat patients with the most common cystic fibrosis mutation that affects 90% of the cystic fibrosis population.

Can I get pregnant with CF?

It takes two CF genes – one from each parent -- to transmit the disease to a baby, and parents often do not know they are carriers of the CF gene. A screening test can be used to see if you and/or your partner have the CF gene.

While there are some challenges to conceiving, most women with CF are able to become pregnant and achieve a normal pregnancy, with 85 percent of couples reporting that they were able to conceive within the first 12 months of stopping contraception, according to the Cystic Fibrosis Foundation.

One of these challenges is a thicker cervical mucus. Thicker mucus can make it harder for sperm to successfully penetrate the cervix and can increase the amount of time it takes to become pregnant.

Inadequate weight gain or weight loss during pregnancy because of the increased nutritional demands also poses issues for women with CF. Therefore, if you are planning to become pregnant, you will need close monitoring by your doctor and you may require additional nutrition sources during your pregnancy.

If the NBS is positive you will be referred to an accredited Cystic Fibrosis Center where a test will be performed to confirm a diagnosis of CF. This is called a sweat chloride test to determine if there is an excess amount of salt in the baby's sweat. A pediatrician from the center will review the results of the newborn with the family. There are more than 130 dedicated CF Centers that have been accredited by the Cystic Fibrosis Foundation (CFF). The CHI St. Alexius Heart & Lung Clinic CF Center has been accredited for more than 35 years and continues to care for both pediatric and adult individuals with cystic fibrosis.

The majority of people with CF are now diagnosed early, which helps delay or prevent serious problems from the disease. With early diagnosis, intervention and proper treatment, people with CF are living healthier lives, and life expectancy has improved dramatically.

How has CF affected your life? 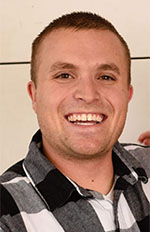 I was born in October of 1991, at the children’s hospital in St. Paul, Minnesota, and had a meconium ileus shortly after and was sent for surgery. I grew up on a farm north of Linton, North Dakota, so I have a family history being in the agricultural industry.

Throughout my childhood I would say I lived an active, healthy life and was involved in numerous extracurricular activities. I don’t believe CF posed any disadvantages in any activities that I participated in. I truly felt that I had as much, if not more stamina than my peers. I’d say it helped dislodge mucus out my lungs which helped manage my respiratory secretions. I often tended to have higher pulmonary function test results during track season.

What challenges have you faced?

I was stumped by this question. That’s a good thing right? I’m a high energy person. I’ve always been on the more optimistic side.

Throughout my childhood, my organ functions operated at a consistent healthy function. I had daily meds and daily treatments. I’ve only been hospitalized one time, since early childhood, in 2010 for four days and that was for the H1N1 virus.

At the time I graduated High School, I started to notice more of a decline in organ function examinations. My liver enzymes became elevated, my pancreas was not contributing the amount of insulin needed to balance out glucose at a normal level, and my lung functions were heading in the path of a slight decline.

I was fortunate enough to be chosen for the Vertex 445 Study (now known as Trikafta) in September 2018, three years after I graduated from college. This was LIFE CHANGING. I knew immediately I was not on the placebo, my wife said even your clothes smell different. My digestive check engine light came on first. The results of my PFTs drastically went up. In three to four months I noticed a pretty substantial change. I will remain on the study and will continue to participate until my last visit in November of this year. Post study I will need to receive the medication through prescription.

What changes have been offered by your provider or the CF community to help you stay healthy?

My family has been avid members of CFA of ND. My parents were board members and my wife is a board member now. We’ve been involved in numerous fundraising efforts. We are fortunate to have CFA of ND to help cover expenses, medical travel and medications. I also received college scholarships for North Dakota State University through CFAND. We see ourselves more involved as donors than recipients with our current condition, that’s not to say I won’t utilize it in the future.

The CHI St Alexius Health medical team (Heart & Lung Clinic) in Bismarck, North Dakota has helped me stay healthy. Debra Fueller is a team member who has followed me for a long time and feels like a life-long friend. She takes pride in a personal approach. The CHI St. Alexius team also has diabetes specialists that I see for CFRD, or CF-related diabetes, as well as other team member specialists. They also recently started an advocacy group.

I see the CHI St. Alexius Health Team twice a year and I alternate with two visits yearly to M Health Fairview Clinics and Surgery Center, with the CF Team and Dr. Jordan Dunitz in Minneapolis, Minnesota. Currently the Vertex 445 Study pays for transportation to conduct the study. After study, my proposal is to see Dr. Dunitz’s team once a year in the summertime if I remain in stable/healthy condition.

How has CF impacted your reproductive health?

CF poses a challenge that can be overcome, for reproductive health. Kaylin (spouse) and I were blessed with two children of our own. Our daughter was born in October of 2018 and our son was born in December of 2020.

How do you see your future and how is it different than 10 years ago?

I’ve always been moving forward. I was able to graduate high school in 2010 and received a bachelor in science degree in Civil Engineering from North Dakota State University in 2015. I’ve been working as a Roadway Design Team member with the North Dakota Department of Transportation since 2014.

CF can come with fears of finances and affordability, so it’s important to know that for the next person there is help – emotional support, financial support and help with medications. I take daily meds and have daily treatments, other than that CF is pretty minimal - just 30 minutes in the morning and 30 minutes before bed at night - and sometimes not even that.

I would tell people not to let cystic fibrosis hold you back. There’s a lot of cool research. There’s always been ideas about down-the-road cures. Now we’re getting actual results. The pediatric CF doctor, who is one of the physicians who oversees the Vertex study, is optimistic that by the time she retires there will be a cure for CF. The future of CF is a lot different from the past.