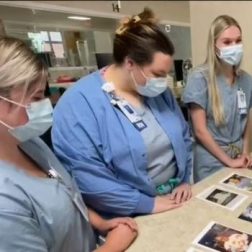 The path we choose sometimes ends up taking us in a circle.

Three young nurses at CHI St. Alexius can attest to that. In fact, they’ll tell you, their lives have now come full circle.

They’re starting their careers in the very place they began their lives.

McKenna Wilson is just getting started in her career as a nurse.

“I transitioned to the RN position this past May,” she explained.

It’s fitting that she began her career as an RN in the NICU at CHI St. Alexius. It is where she and her brother and sister started their lives.

The triplets spent two and a half months in this NICU. Pam Mastel and Susie Dinga were NICU nurses then and cared for the Wilson babies. Now, they’re McKenna’s coworkers.

Kallie Anderson and her twin brother Nash spent a month in the NICU. Mastel remembers those days well.

“We’ll talk about things like, I remember when I put both your twins in your dad’s arms,” Mastel said.

“I loved hearing how the nurses had such a strong impact on my family, on my parents. I wanted to be able to do that for another family,” said Anderson.

Madisyn Bargmann spent 10 days in the NICU as a baby. In January, she started her job as a NICU nurse.

“I always knew I wanted to be a nurse,” said Bargmann. “It felt like it was where I was meant to be.”

“It just touches our heart to know that they want to like come back,” said Mastel.

A homecoming that for Mastel and Dinga, is one of the biggest compliments of their careers.

Here’s another fun twist to this story: Bargmann is getting married soon. Her fiancé's grandma is a former NICU nurse at CHI St. Alexius.