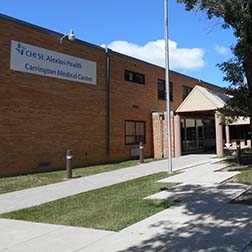 The Top 20 Critical Access Hospitals, including CHI St. Alexius Health Carrington, scored best among critical access hospitals as determined by The Chartis Center for Rural Health for overall performance. The rankings were recently announced by the National Rural Health Association (NRHA). An awards ceremony will be held during NRHA’s Critical Access Hospital Conference in September in Kansas City, MO.

Those hospitals that have been recognized as Top 20 Critical Access Hospital “best practice recipients” have achieved success one of two key areas of performance:

Quality index: A rating of hospital performance based on the percentile rank across the five categories of Hospital Compare Process of Care measures.

“CHI St. Alexius Health Carrington is extremely proud of the efforts of its medical providers and staff who have contributed to our hospital achieving this designation once again,” said Mariann Doeling, RN MAL President of CHI St. Alexius Health Carrington. “Our results as a top overall performing hospital in the United States means the communities we serve can count on us to deliver the local services they need now and in the future.”

CHI St. Alexius Health Carrington is the only Critical Access Hospital to have won the Top 20 distinction five times in the overall performance category, which is the hardest to achieve according to the NRHA.

“It truly is the dedication of the medical providers, administration, and staff working at our organization that makes this distinction possible,” comments Doeling. “We’re thankful the community chooses to receive their healthcare locally, as that makes an impact as well.”

CHI St. Alexius Health Carrington celebrated its 100th year of delivering local healthcare in 2016. Originally opened as the Carrington Hospital in 1916, the hospital was leased to the Presentation Sisters of the Fargo Diocese in 1941. The Presentation Sisters joined the Catholic Health Corporation of Omaha in 1980 and later became part of Catholic Health Initiatives. Earlier this year Dignity Health and Catholic Health Initiatives formed a new healthcare organization together naming the new unified system CommonSpirit Health.

Catholic Health Initiatives, a nonprofit, faith-based health system formed in 1996 through the consolidation of four Catholic health systems, expresses its mission each day by creating and nurturing healthy communities in the hundreds of sites across the nation where we provide care. One of the nation’s largest nonprofit health systems, Englewood, Colo.-based CHI operates in 18 states and comprises 101 hospitals, including two academic health centers, major teaching hospitals and 30 critical-access facilities; community health-services organizations; accredited nursing colleges; home-health agencies; living communities; and other facilities and services that span the inpatient and outpatient continuum of care. CHI is a part of CommonSpirit Health, a nonprofit national health system committed to advancing the health of all people and dedicated to serving the common good.

About the National Rural Health Association
NRHA is a nonprofit organization working to improve the health and wellbeing of rural Americans and providing leadership on rural health issues through advocacy, communications, education and research. NRHA membership is made up of 21,000 diverse individuals and organizations, all of whom share the common bond of an interest in rural health. For more information, visit RuralHealthWeb.org.