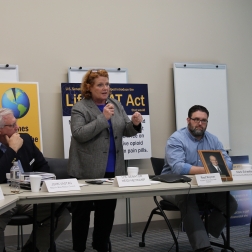 By Sydney Mook of The Dickinson Press

Reed Reyman, president of CHI St. Alexius Health, said the Dickinson area has seen a 300 percent increase in opioid cases coming through their doors over the past three years or so. Since the oil boom three years ago, the hospital was getting about five opioid cases a month, that number has since doubled and only continues to increase, Reyman said.

An agent with the Southwest Narcotics Task Force said the area has seen a "huge influx" of heroin, fentanyl and carfentanyl over the past few years. The number of overdoses they've responded to has also increased, including two overdoses in the same house within 24 hours a couple of months ago. The agent noted that the price for methamphetamine is approximately a fourth of what it was three years ago.

"We can't jail our way out of this problem, but we also can't cut back on law enforcement services because once we do, the price goes down, it becomes more accessible and we have a bigger problem," Heitkamp said. "This isn't just about curbing demand, we've got to fight on the supply side as well."

"He went to bed like any other child would on a Friday night and in the morning we found him," she said, holding back tears. "We got the autopsy report back and he had three different types of opiates, he had cocaine, benzos and marijuana in his system."

Gonser said she hopes she can help just one family or one child so they do not have to go through the same thing her family has gone through.

Heitkamp is a co-sponsor of a bill that would establish a one-cent fee on each milligram of active opioid ingredient in prescription pain pills. The money, which Heitkamp says would currently total more than $1 billion, would then go to a national fund to help treat the epidemic.

John Vastag, CEO of North Dakota Assistive and head of the Mayor's Blue Ribbon Council in Fargo, said while the federal and state government can help provide funding and legislation for programs, it is ultimately up to the communities themselves to get everyone involved to help with the problem.

Kayleen Wardner, founder of Western Edge Ministries and Hope's Landing, while providing something like psychological services can help someone, it is important to know that there has to be more done. People convicted of drug-related crimes and addicts can fall into a cycle of getting out of prison, being unable to find a job or place to live, selling drugs in order to get by and then being arrested and being sent back to prison.

"We're recommending a nine-month stay at Hope's Landing," Wardner said. "We see ourselves as that place where the ladies can go after the 30-day treatment and from what we have seen and studied that 30-day treatment is just the very beginning. The addictive brain doesn't have time to do a lot of healing in that time."

She said at Hope's Landing the women are able to learn life and job skills that they did not have as an addict.

"We need the community to hire our ladies," Wardner said. "We have a safe place to live and a job means really hope for the future."

Full story and photos by Sydney Mook can also be found here: