Mission Manager makes a difference at hospital and on the field 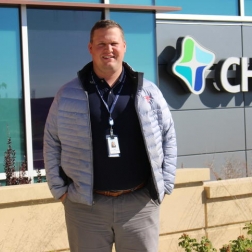 Making a difference: Trinity football coach John Odermann makes an impact on players’ lives on and off the field

John Odermann may be known for being a high school football coach, but he wants to have an impact that lasts long after the game clock runs out on a Friday night.

Odermann, who grew up on a ranch north of Belfield, is the youngest of eight kids and has lived in the Dickinson area for most of his life. He graduated from Trinity High School in 2002 with his identical twin brother Jacob and attended college at Concordia College in Moorhead, Minn., where he majored in political science and econ, and played football.

Odermann said he never imagined being a head football coach until the job opened at the end of the 2012 season when former head coach Randy Gordon retired after 26 years at Trinity.

Before becoming the head coach at Trinity, Odermann worked in the oil fields as a field, service and sales technician for Pace On Systems, which installs electronic drilling recorders on the rigs.

"It never even crossed my mind until the job opened," he said. "I felt like I could provide something that I thought was important to provide, not just to the school but for the community as well. ... It was kind of a calling."

Gordon taught him that "you can win a million football games, but if the guys that you coached don't end up being good employees, good fathers, good people in the community then you haven't really done your job." Odermann has always stressed to his players that "the type of person you are is way more important than what your win-loss record."

He later went on to pursue a teaching degree and became the school's director of advancement for four years, which involved fundraising and alumni relations among other duties. Odermann said the position helped him learn more about the history of the school, which also helped him with his coaching.

"Being able to bring that element to the kids and say, 'This school was here long before you, it's hopefully going to be here a lot longer after you graduate and what you do while you're here helps build that legacy,' " he said. "We talk about that a lot at practice and team meetings how the double T on the helmet means more than just what school you play for. It means a lot to a lot of different people. It's kind of like your last name. You try and leave it better than it was when you got it."

Odermann took a position in March 2017 as manager of Missions at CHI St. Alexius hospital in Dickinson. While a doctor or a nurse can help patch someone who has a broken arm and get them feeling better physically, Odermann's position helps the person feel better spiritually if they need it. He will sit with someone in the emergency room until their family arrives or even hold someone's hand if they are at the end of their life.

"It's a big part of what hospitals do, but you don't see it on 'Grey's Anatomy' or 'ER' where the chaplain comes into the room and helps the person after they've been patched up. That's a huge part of the healing process," Odermann said.

He also helps make sure that doctors and nurses are taken care of spiritually.

"John's job is to make sure that we maintain that ethical and moral balance as a hospital," Reyman said.

He said it was "very obvious" during the interview process that Odermann was raised in the Catholic faith and has a strong ethical and moral background.

"It's been a lot of fun getting to know John. He's a very interesting and energetic young man who comes from a large family," Reyman said. "... He wants to make sure he's doing the right thing and he wants to do it the right way. He understands he has a lot to learn, but he's really putting himself out there to learn."

The new position also helped Odermann grow closer with his wife, Jessica, who works for the North Dakota Department of Human Services and has a background in domestic violence awareness, and drug and alcohol prevention and education. The couple has a 3-month-old baby girl together named Maggie.

"We've talked about this stuff for years and now having experience with myself, we've been able to have deeper conversations about it," he said. "We've been able to get together and educate people about these kinds of things in our personal life. ... I think that's made our relationship deeper and it's helped us as a couple."

When he's not busy coaching football or working at the hospital, Odermann said he enjoys working at Badlands Comics and Games, a comic book store in Dickinson that he co-owns with a friend. He also enjoys reading and watching movies, and hunting in the fall.

When Odermann became the head coach he instituted the "Titan Challenge," which he likens to the 10 commandments of Trinity football. It includes making sure all of his players are spiritually mature, mature in their relations and ensuring they make good decisions.

"I think it's important to coach on many different levels," Odermann said. "You can coach on the X's and O's, you can coach on football philosophy. But there's philosophies about life that people need to know as well."

Odermann said he enjoys being a football coach because he feels like he can make a difference in a kid's life. In his first year as coach the team did not win a game, but the following spring one of his players' mothers came up to him and told him that her son had written his college entry essay about how Odermann had taught him about "being a man."

"We want kids to learn from our experiences and to have a mom tell me that what I said as a coach got through to their kid meant a lot," he said. "... It's a thankless job sometimes and people can say it's a fairly simple way of making difference. But you're making a difference in people's lives and I think you can make a profound difference."