Practicing for a Pandemic 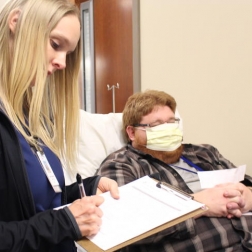 Practicing for a pandemic: Counties, health agencies across western ND learn how to prepare for a flu pandemic

The flu is spreading, hospitals are full, resources are scarce, people are dying. These are the scenarios county emergency management and health officials dealt with during a full-scale training exercise on Tuesday.

"Pandemic Over the Prairie" involved emergency management from 12 counties, three public health units, 25 health care agencies and many others. The day started out with an overview of the current situation of the pandemic, which had been going on for six months prior to the launch point of the scenario. Hospitals and clinics are starting to fill and there are no beds available in the state. Medical staff and supplies are scarce and there is a shortage of Tamiflu. While there is more vaccine on the way, it is in short supply. Emergency responders, elderly and children will be the only ones given doses.

"The scenario that was chosen is very realistic," said Sherry Adams, executive officer of Southwest District Health Unit. "If you think these comments are fetched, they really, truly are not."

The next step for emergency management and the health care agencies was to form incident command groups. Later, the "vaccine," which was a box of candy, arrived at the Southwest District Health Unit in Dickinson and was then distributed throughout the area, just as it would be in a real life emergency.

The exercise was designed to test the communication skills of the various entities to ensure that each one has a plan in case a flu pandemic, or other type of catastrophe, hits the area in the future.

Dunn County Emergency Manager Denise Brew said one of the most important factors in responding to an emergency is communication.

"As much as we practice this part of it, there's always something that goes wrong," she said. "Cell towers is probably the biggest one. We need to not rely on them during an emergency, but we all do. ... If this was the real deal, we probably wouldn't even try cellphones because every cell around would be way too busy. So, it's important to remember to go back to the landline and the radio."

In the afternoon, it was the hospital's turn to test its preparedness as large groups of "patients" started coming through their doors with severe flu symptoms and other problems.

Leaders at CHI St. Alexius were given varying situations, from decreased staff and how to coordinate them properly to a limited number of body bags and ventilators. Each scenario was designed to be a realistic problem that a health care facility could run into during an actual pandemic. Leadership had to decide when to call in help or send patients to the Sanford clinic across the street for additional help.

Reed Reyman, president of CHI St. Alexius Health Dickinson, felt the exercise went "fairly well." He said they will take everything they learned on Tuesday and talk about what went right and where they can make improvements to ensure patients are safe and taken care of.

"We put a lot of different people in a lot of different roles (on Tuesday) and gave them an opportunity to lead. I think that's always beneficial," Reyman said. "... We keep shifting around because I think if you get out of your comfort zone and you think differently, it just helps people get better-prepared."

Reyman said he believes the scenario was very realistic and could definitely happen in southwest North Dakota or across the state.

"If you really start to look deep into it, it wouldn't take long or much of a disaster to fill us all up," he said. "I think a flu or a pandemic or anything like that is very realistic."

Adams said they typically have an exercise during the fall, but they decided to choose a pandemic because it would encompass almost all of the agencies in the region. She was "very pleased" with how things went.

"All of the reports that I got back from everybody was that it was a good exercise and they learned a lot," she said.

One of the biggest challenges agencies faced was radio communication, Adams said, adding that Theodore Roosevelt Amateur Radio Club operators helped them communicate when other forms of communication weren't working.

While the exercise was meant to be fun, Adams said it was also designed to be a real life scenario where emergency management and health officials would have to decide who gets the vaccine. She said the scenario can apply to much more than a flu pandemic, such as a mass fatality shooting like in Las Vegas earlier this month or the Orlando shooting last year.

"This kind of practice and preparation can come into play for any kind of scenario that we may have to face," she said. "... It takes all of us coming together to make this work and I think that was the thing that made (Tuesday) a success."

On Wednesday, the health unit will complete part two of the exercise, which will include vaccinations for law enforcement and emergency workers. There will also be a real, public flu POD where people can come in to get vaccinated.