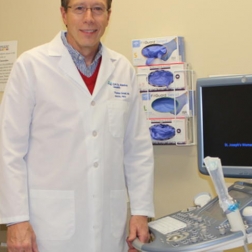 By Linda Sailer, The Dickinson Press

Dr. Thomas Arnold, OB/Gyn  is never far from his cellphone.

“It’s a lifestyle -- my patients come first,” he said from his office at CHI St. Alexius Health-Dickinson.

He has dedicated 30 years of medical practice to a full range of obstetrics and gynecological services. The concern for his patients remains constant, but a model of prenatal care is evolving.

The medical clinic was recently approved as the first site in North Dakota to provide the option of CenteringPregnancy Group Prenatal Care. It’s not a class, but prenatal care in group form.

“It’s very popular on the East Coast and West Coast and it started in the 1990s,” Arnold said. “Ideally eight to 14 people are in a group. You go through the whole pregnancy experience with other patients of the same gestational age.”

The first group started in June and it just finished.

“CenteringPregnancy  is a very good way to receive care, but it’s not for everybody,” he said. “You meet for 1½ to 2 hours, spending time with your provider and nurse. You have your own little private exam, and come together as a group for a facilitated discussions. We talk about timely gestational topics. Early on its nutrition or genetic evaluations, and later on it may be pain control and delivery.”

The visits are monthly up to 30 weeks, then every two weeks until 36 weeks and weekly from 36-40 weeks.

“What happens is the patient ends up with way more time with her provider, instead of 10 or 15 minutes per visit,” he said. “You get  a little private time, but discuss the topics together. It’s an efficient way to answer questions, then everybody has a chance to contribute and everybody receives the information.The goal is to empower them and to educate them so they can make important decisions throughout the pregnancy, at the time of labor and delivery and postpartum period. All the options are very individualized. Our job is to educate them, and when they come in, they are informed to make a better decision.”

Many patients learn best when information is presented in a group setting, he said.

“Our very first session, a young lady who was having twins said her biggest concern was wanting to nurse her babies, but didn’t know if she was up to the challenge. A lady across the group said she nursed her twins up to 14 months and said she’d do well too. You could see her just relax. The lady had a bigger impact on the patient than what I could have said. It’s that kind of thing that happens.”

In another example, a young woman was looking for a yoga pregnancy instructor. She came back, saying she found someone and two other women joined her in the classes.

The group is valuable in Dickinson because young parents are moving into town for employment.

“They don’t have a lot of friends, so here, you’re meeting a bunch of other people who have a lot of things in common,” Arnold said.

A six-week reunion of the first group is being planned -- an opportunity for parents to return with their babies.

“These people get very close -- they are like best buddies,” he said.

Arnold will give a presentation on his experiences with CenteringPregnancy during an upcoming conference of the North Dakota Society of OB/Gyn.

Arnold  grew up on a farm between Taylor and Richardton -- the farm that he and his wife, Marie, currently own.

“It’s like a lake cabin without a lake,” he said.

After graduating from Richardton High School, he served a year in the military, and enrolled at Dickinson State University. He intended to transfer after two years, but met  Marie, who was an education major there. He graduated with a chemistry major, biology-coaching double minor. He intended to pursue veterinary medicine, but decided he’d rather work with people rather than animals. Marie taught business education a year at Hettinger High School while he finished his degree.

They were married May 31, 1980, and he enrolled in the University of North Dakota Medical School that fall.

“The sciences came easy to me and I was driven that way,” he continued. “I think the interest was mostly inside myself. I always think it was some higher power that led me along the way.”

He attended medical classes for two years at Grand Forks, a third year in the Twin Cities and a fourth year back in North Dakota for additional rotations.

“We rotated with the University of Minnesota students -- we did the same rotations they did -- it was a very diverse experience,” he said.

The residencies were completed at the University of South Dakota School of Medicine at Vermillion, and Sinai-Samaritan Medical Center in Milwaukee.

He started his medical practice in Dickinson on Aug. 15, 1988, as a partner with the late Dr. Donn Slovachek, OB/Gyn.They were the only two OB/Gyn specialists in Dickinson at the time.

“I started Friday because Dr. Slovachek wanted to attend the McQuade softball tournament and asked me to cover for him. I delivered a baby that Friday and surgery that Sunday. I was 30 years old at that time.”

Arnold’s practice includes a combination of obstetrics, along with laparoscopic, vaginal, abdominal and gynecologic surgeries, urinary and voiding problems.

He’s kept track of the number of babies delivered in Dickinson -- approximately 6,000.

Is there currently a baby boom?

There are probably two-and-a-half times the number of babies being born today as when he started in Dickinson. There are five OB/Gyns, plus family physicians who deliver babies, he said.

“We are treating so many conditions medically than we did before. An example is heavy menstrual bleeding is controlled by medications instead of surgery,”  he said. “Fertility treatments have improved significantly -- we have tests to help with diagnosis, which we didn’t have when I first started.”

The bond fostered between patient and physician is still the same.

“It goes both ways. If I take care of the pregnancy, I’d like to be there for the delivery too -- I’m old-fashioned that way,” he said. “Obstetrics is a very nice speciality -- it usually has a happy outcome -- it’s the reason I went into it. My philosophy is we should be pleased and honored these patients have chosen to see you during a very special part of their life. That’s really neat.”

Arnold continues to advise a Boy Scouts Medical Explorer Post in Dickinson. He was among three physicians invited to speak to the Scouts in the 1990s when they met in basement of Great Plains Clinic.

Medical Explorers is still going, but it has evolved. The Dickinson High School health careers class does a good job of introducing health careers, hence Arnold arranges shadowing experiences for students and they may participate in a field trip to the UND School of Medicine.

Arnold and Marie have chosen to remain in Dickinson for the same reasons they moved here in the first place.

“I always wanted to come back for three main reasons -- family, farm and Dickinson State,” he said. “My kids grew up going out to the farm. We bought the farm in 1993 from my parents and I hired dad as a hired man -- he loved it out there -- it was his life.”

The Arnold family includes five children and six grandchildren, with another child on the way. Tom and Marie, along with their children, are all graduates of DSU. Currently, he serves as president of the DSU Heritage Foundation.

Arnold is on call for his patients 24/7 during the week, but rotates the weekends with the other OB/Gyns. He is active in the American College  of Obstetrics and Gynecologists, and is co-chairing the ACOG’s national mentoring program.