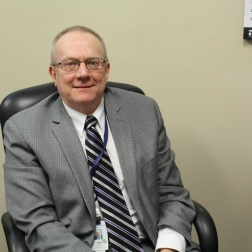 By Sydney Mook, The Dickinson Press

Reed Reyman, president of CHI St. Alexius hospital in Dickinson, is a busy man who is striving to make the hospital and the community a better place.

Reyman grew up in eastern Montana about 140 miles away from Dickinson. While he got recruited to play football at Dickinson State University in the 1970s, he didn't end up attending school in Dickinson. But his children and their significant others attended DSU, he said.

Before getting into the healthcare sector Reyman was involved in education worked a special education teacher and a school psychologist, which often had a large healthcare aspect.

"As I moved closer and closer towards wanting to move into administration I felt more of a connection with the healthcare side than I did with the school side," he said. "I was a school administer for awhile but I always pulled a little more towards healthcare."

He got his healthcare start in his hometown of Terry, Mont. at a two-bed hospital and then continued on from there.

"I kind of learned everything from the ground up," he said. "... I did everything I possibly could to learn."

Reyman also worked with Glendive Medical Center and later got his nursing home license and then ran the Glendive VA.

"It was fun," he said. "I just like to work with people who like to help people and work with them to do that."

Reyman started at what was then CHI St. Joseph's in 2009. At that time the hospital was in the middle of Dickinson in the same spot where it had sat for decades. He already had family that lived in the area so he took the opportunity to move to North Dakota.

Being a part of a Catholic health system was also important to him, Reyman said.

"That was one of the reasons I was interested in putting my name into the hat," he said. "There's usually a large connection to make sure that we're doing charity care, making sure we're serving everybody in the community regardless of their ability to pay. .... Having a church involved in healthcare can sometimes give that extra feeling of comfort."

Since Reyman arrived the hospital has moved across town to a new facility which opened at the end of 2014.

"It was hard to leave the old facility because there was so much history there," he said. "It was home for a lot of people for a long time but now that we've been here for a couple of years we can see the advantages of doing 21st century care in a 21st century building."

Reyman added that the old building is still in good condition and talks are ongoing what will happen with it down the line.

Reyman's day-to-day is often filled with meetings between staff and others to make sure things are running smoothly at the hospital, but he noted that no day is ever the same.

"Everybody that comes for care we only get one chance so we want to make sure we do it right the first time," he said.

The mission of the hospital is to "nurture the healing ministry of the Church, supported by education and research. Fidelity to the Gospel urges us to emphasize human dignity and social justice as we create healthier communities," CHI's website says. This is something the hospital tries to do each day as they treat patients, Reyman said.

"We want to make sure we treat the whole person and let them know that they're welcome here regardless of the ability to pay or all of those anxieties we can get when we're sick," he said. "Hopefully they feel they can set those aside and get treated."

"We want to be involved and engaged as much as possible to make sure that southwest North Dakota thrives and does well," he said. "We donate to lots of charities and we help a lot of things like the Homeless Coalition and the Domestic Violence Rape Crisis Center."

Outside of work Reyman said he enjoys spending time with his family no matter what they're up to.

"I've got a very supportive spouse and she's been wonderful and so every opportunity I get time to spend time with her is probably the main thing," he said. "... Whether it's golfing or playing cards I like spending time with family."