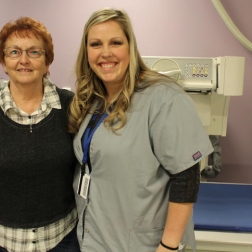 Story and Photo by Sydney Mook of The Dickinson Press

CHI St. Alexius in Dickinson is one of many facilities incorporating the ever-changing and advancing knowledge of the medical field with tried and true methods.

Dorothy Meduna served as director of the hospital's radiology department for around 15 years before retiring at the end of 2017. Tracey Mann, who worked under Meduna for several years, has since taken over that leadership role in the hospital.

Mann got her start in Dickinson as a PRN X-ray student under Meduna but continued to climb the ladder until taking over the director's role from Meduna last year.

"Having (Meduna) as a director, she allowed for me and all of our co-workers to progress and advance our knowledge," Mann said.

Passing on knowledge and instilling leadership into her team was important to Meduna.

"I very strongly believe in mentoring the young people and getting them opportunities to advance," she said. "When I started off in X-ray no one ever gave you that chance and there wasn't the schools that you can go to now for X-ray or MRI or all of these other modalities. You had to learn it on the job. ... I felt very strongly that everybody needs that opportunity to learn and offered that to every student and every new person."

Meduna got her start in the field nearly 40 years ago and has seen a lot of changes.

"When I started out we took X-rays and that's all we did, they didn't even have CAT scan when I started out," she said. "... We did a little bit of nuclear medicine but not near the caliber they're doing now and a little bit of ultrasound, but not near the amount they're doing now, and MRI wasn't even talked about when I started. That's why I've liked radiology because it did change. It kept advancing and advancing. It gave me opportunities to make those advancements. I didn't have to stay and just do X-rays."

The hospital hired a lot of new college graduates, which allowed Meduna to pass her knowledge onto others, she said.

"I'm so happy that we did because each one came in with a great attitude and a good work ethic and looked forward to the advances," she said.

Mann said Meduna has always been there to answer any questions that she had, and continues to offer answers in retirement.

"Working together was great," Mann said. "I've always looked to Dorothy as a role model. ... She's kind of my encyclopedia. She did great showing me her role for when she retired and she's even answered my phone call a couple of times after she's been retired. She's just been a great role model for me."

In general there is a strong leadership presence among women in the hospital. Reed Reyman, president of CHI St. Alexius-Dickinson, said a majority of his leadership team is made up of women, with around 18 of 22 positions being held by women.

"I think nursing has always been looked upon as a female profession," Reyman said, but noted he doesn't think there's a real reason why the health care industry is so female dominated. He noted that it could be due, in part, to the flexibility of working hours, but overall there isn't a definitive reason.

"Educationally women are taking more traditional male roles, they're going into science and math," Meduna said. "... I think now as the world continues to change so much I think a lot more female roles in leadership are opening up."

Overall, Meduna said she enjoyed working with her staff during her time at the hospital.

"I just had such good staff," she said. "I could depend on them every single day to do what they were supposed to do. If I was gone I knew that everything was going to be OK because they just came to work and they came to work to do work. That made my life so much easier."

Mann said she enjoys seeing people from start to finish and helping them get better along the way.

"I think getting to help people (is my favorite part)," Mann said. "Getting to see people through the process of coming in and not feeling well, helping them heal and then getting them out into the community as a better, healthier version of themselves."