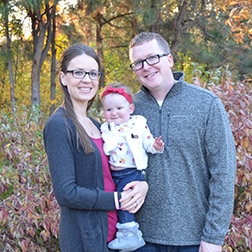 From the Spring 2020 Edition of Firm Foundation - A Publication of CHI St. Alexius Health Dickinson Foundation:

Travis Booke has had plenty of experience providing care for others. After working as a Paramedic in Dickinson, Belfield, Medora and Beach, and teaching CPR classes throughout western North Dakota, Travis finally followed his love of medicine to Physician Assistant school at the University of North Dakota School of Medicine.  Nearly three years ago, Travis began working as a Hospitalist at CHI St. Alexius Health - Dickinson caring for patients in the Medical/Surgical and Intensive Care Units.  As he and his wife, Sara, planned to grow their family, the last thing he ever expected was to be on the receiving end of healthcare.

The Bookes were thrilled to learn they were expecting their first child in 2019. They joined one of the CenteringPregnancy® Group Prenatal Care classes at CHI in Dickinson--the only location in North Dakota to offer this innovative model of care. Led by Dr. Thomas Arnold, the classes offer individual assessment combined with interactive group education sessions.  It was during routine prenatal ultrasounds that Sara learned she may have placenta accreta—a condition that could lead to serious complications at delivery. After referral to a specialist in Bismarck and further testing, she was cleared from having the condition; however, concern turned to their unborn baby—scans revealed a possible heart condition and more testing would be needed.

As their network of care expanded from specialists in Bismarck to Children’s Hospital of Minnesota, Sara and Travis learned their baby girl had a congenital heart defect.  It appeared that her pulmonary arteries were either very tiny or perhaps non-existent. Doctors explained that baby’s oxygen supply would remain stable as long as she was growing in-vitro. However, it was uncertain if she would have the capacity to breathe and get oxygen on her own upon delivery.

Facing many unknowns, the Bookes relocated to Minneapolis in August to be near the team of experts overseeing their care before, during, and after the baby’s birth. While their care team had prepared them for all possible scenarios, when their daughter Brenna was born 2 weeks early on September 2, they were buoyed by hope.

Travis shares, “Honestly, with all the sobering information we were given, I was bracing for a blue baby, but she was PINK! We knew we still had miles to go but seeing her alive and fighting was truly a miracle.”

As Brenna grew stronger, the team at Children’s made a point to coordinate with several local healthcare entities in Dickinson to make sure a plan was in place for Brenna’s care when she returned home – this included the teams at CHI St. Alexius Health Dickinson’s Emergency Department, Pediatric Clinic, and even the local ambulance crews.

The Booke family arrived home in Dickinson together for the first time on October 31, 2019. Brenna has continued to grow and progress, although future surgeries will be necessary soon. Travis states, “We have such a great team here locally. We started our prenatal care with Dr. Arnold and the Women’s Health team before we had to head to Minneapolis, and now we see Dr. O’Hara for Brenna’s pediatric care. We have been to the Emergency Department and saw Dr. Swenson. We have had multiple ultrasounds on Brenna as well.  I even did a presentation about her to the local ambulance hall and the Emergency Department providers are all very aware of her needs. It’s been great to see everyone come together.”

As they await Brenna’s next surgery, the Bookes are thankful for their extensive community of caregivers--especially the local healthcare teams who are dedicated to understanding the unique needs of little Brenna and working together to give her the best chance to thrive.

Update November 30, 2020: Brenna recently underwent another major surgery on October 16, 2020, at Stanford Children's Hospital in California. She is doing well, and the Bookes are back home in Dickinson as Brenna continues to recover.