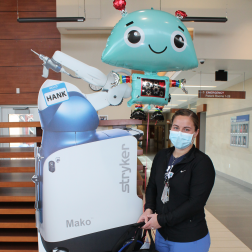 CHI St. Alexius Health Dickinson has recently announced the winner of the naming contest for its new Mako robot for orthopaedic surgeries. Dozens of name entries were submitted by CHI staff and members of the community. A committee narrowed the submissions down to the top three names, and CHI St. Alexius Dickinson staff voted via online survey to determine the winner.

The name HANK (an acronym short for “Hips And New Knees”) was chosen as the winner by the online vote.

As the winner of the contest, McKenzie received a custom CHI prize package along with publicity for her winning name in hospital publications and local media.

About the Mako SmartRobotics™ System:
CHI St. Alexius Health Dickinson Foundation’s Board of Directors recently approved the purchase of Stryker’s Mako SmartRobotics System, making CHI St. Alexius Health Dickinson the first hospital in the region to offer this type of robotic-arm assisted technology for total and partial knees and total hips. To read more about the Stryker Mako System robotic-arm assisted technology for use in total knee, partial knee and total hip replacements, go to: CHIStAlexiusHealth.org/DickinsonOrtho