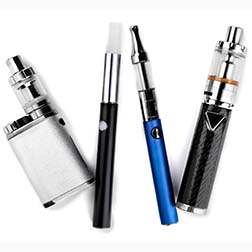 Electronic cigarettes (e-cigarettes or e-cigs) are a diverse group of products containing a heating element that produces an aerosol from a liquid via a mouthpiece. E-cigs are also known as electronic nicotine delivery devices (ENDs), vapes, vape pens, mods, tanks, and the newest term…Juul (pronounced “jewel”). Because e-cig users are inhaling a vapor and not smoke, they often refer to the act as “vaping” or “Juuling” to distinguish themselves from tobacco cigarette users.

E-juice is a term used to describe the liquid placed in an e-cig. The e-juice can be purchased in a bottle which is used to fill the tank of an e-cig. One can also purchase cartridges that come prefilled with e-juice. Some popular e-juice flavors include Surf Cake, Blu Voodoo, Unicorn Milk, Jam Monster and Yummy Strawberry.

E-cig Evolution
E-cigs were first promoted as a product used to help people quit smoking traditional tobacco cigarettes. It is now well known that when people plan to quit smoking using an e-cig it is rarely successful. Many people become dual users (smoking cigarettes and vaping/Juuling) and nicotine addiction tends to increase.

Target Population
Although there are people of all ages that use e-cigs, the Juul has drawn the attention of the teenage population. It looks like a USB drive that is used for computers thereby making it difficult for anyone to notice that an e-cig is being used. After all, who would be ordering Unicorn Milk e-juice, your grandma?

Another thing that attracts youth to the Juul is the low/no aerosol output. When one uses a Juul, there is no visual smoke or aerosol that is seen when exhaled. There may be a light scent (like Yummy Strawberry) when used indoors and in classrooms, but no visual proof.

Are e-cigs as harmful as cigarettes?
The answer is: we don’t know. In 2016, a study was published in the Journal of Pediatric Nursing titled “Nicotine Content and Packaging of Electronic Cigarette Refill Liquids and Vape Store Compliance With Legal and Ethical Standards in North Dakota” by Kelly Buettner-Schmidt, PhD, RN, Donald Miller, PharmD, FASHP, Narayanaganesh Balasubramanian, PhD (doi: 10.1016/j.pedn.2016.03.019). This study found that 51 percent of the labels on e-cigarette liquid nicotine in North Dakota do not accurately reflect the levels of nicotine found in the products. Actual nicotine levels in some products were 172 percent higher than labeled. Forty three percent of the e-liquid containers in the study that claimed to contain no nicotine in fact contained nicotine.

The North Dakota Department of Health, Tobacco Prevention and Control Program has the following position on e-cigs: 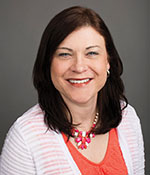