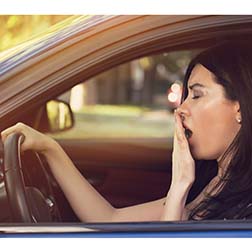 Tired drivers cause an estimated 72,000 police-reported crashes a year according to The National Highway Traffic Safety Administration (NHTSA). They estimated that about four percent of adult drivers have fallen asleep while driving in the past month. Drowsy driving happens when one hasn’t slept well, enough, or not at all. Untreated sleep disorders such as insomnia, sleep apnea, and narcolepsy can cause drowsy driving. Drowsiness slows reaction time, impairs judgment and vision, and interferes with information processing and short term memory. Impairment after 17 hours of being awake is equal to a 0.10 percent blood alcohol, greater than the legal limit in ND.

Warning signs of drowsy driving are yawning or rubbing eyes frequently, drifting outside the lane of traffic, missing signs and exits, getting too close to other vehicles, trouble focusing or keeping one’s eyes open.

The Center for Disease Control and Prevention (CDC) reported that 31 percent of ND adults reported getting less than the seven hours (at least) recommended for adults. If you don’t get enough sleep it may increase your stress hormones during the day and increase inflammatory protein production during the night. Inflammation is the starting point for developing chronic diseases such as heart disease and high blood pressure. The Department of Health and Human Services reported in a study of healthy young men that after six nights of sleeping only four hours a night, they showed insulin and blood sugar levels like someone developing diabetes.

So what does sleep do for drivers, and the rest of us too? According to the National Sleep Foundation and studies by the National Institutes of Health, it does a whole multitude of things.

The blood pressure and heart rate decrease, giving a rest to the cardiovascular system. Breathing slows down and becomes regular, the immune system increases its production of cells that help fight off illness, increases muscle and tissue repair and it may significantly increase brain waste-removal.

Sleep apnea is the second most common sleep disorder and affects about 20 million Americans. Signs of sleep apnea include loud snoring, gasping for air, daytime drowsiness, and frequent pauses during breathing. Many studies have shown that untreated sleep apnea can increase the risk of diabetes, high blood pressure, heart attack, stroke, and obesity. Sleep apnea results in interruptions in sleep (from a few times up to 400 times a night) and a total decreased sleeping time. A consistent lack of sleep can result in daytime drowsiness, decreasing driver alertness, slowing their reaction times, and affecting their judgment. A study of commercial drivers showed that unhealthy lifestyles, sleep issues, and working long hours, were the chief causes of driver drowsiness.

The study of sleep is continuing but one thing is for certain – it’s very important for your well-being. As a 14th century dramatist said long ago, “Sleep is the golden thread that ties health and our bodies together.” 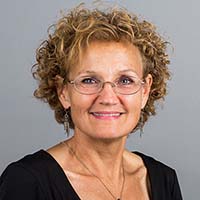