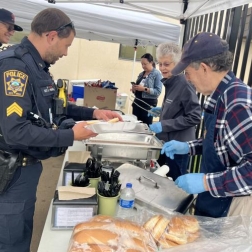 CHI St. Alexius Health Williston hosted the First Annual First Responders Appreciation Picnic, and this year was their best turn out to date.

“We usually have around 80 to 100 people per day, but our first day this year we saw over 100 people,” said Mark Bekkedahl, Manager of Mission Services for CHI.

This two-day appreciation event in the Law Enforcement Center’s courtyard took approximately 20 volunteers per day and a lot of community involvement to be successful. The Korner Lions were busy on the grill and could not be happier to be involved.

Lion Kent Reierson, a “tail-twister” with the organization said that they were excited to be involved in this event again this year.

“We wanted to thank them [first responders] for all the things they do,” Reierson said.

Walt’s Market provided a very generous discount on the total grocery bill for the event, and even let CHI employees go back on day two to get more, when the event was running low on supplies.

Susie Q’s Ice Cream was serving up sweet treats at the picnic and said that the most requested item by the first responders were her strawberry shortcake bars.

Owner, Susan Elsbernd, is a nursing supervisor at CHI and said she got involved because she works with first responders everyday and they deserve the acknowledgment.

Bekkedahl explained that the annual event actually started off as an accident nine years ago when a major fire happened outside of town. Bekkedahl rallied some employees from the hospital to bring food out to those responding to the fire, and upon seeing how much it meant to the first responders, the tradition was born.

“It’s something I had always planned to do,” Bekkedahl said. “We started to see the back the blue thing and thought it was a good thing to support. That fire just set everything into motion.”