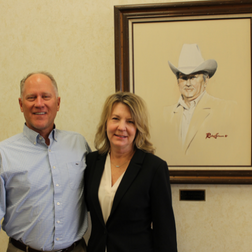 It sounds like a scene out of an old Western. In 1906, W.S. “Bill” Davidson, Sr., arrived in Williston by train and walked up Main Street to have a look around the town. The first person he met was a physician named Edward Hagan, Sr.

“They met on Main Street and became good friends, and then they got to know the Sisters of Mercy,” said Patrick Sogard, Chairman of the Board of American State Bank and Trust Company.

Those new friends would go on to do great things.

In 1906, Bill began his relationship with American State Bank and Trust Company.  A bank he would come to own and operate for the rest of his life.

Stories of those hard scrabble early days endure. For example, when the Sisters were having to go without meat in the hospital, all they had to do was mention it to Bill, who was also a rancher.

“Bill would have them slaughter steers and fill the hospital’s cooler up with meat,” Sogard said.

It’s a story he’s heard many times as the husband of Bill’s granddaughter, Tammy. Sogard represents the third generation of the Davidson family to run the bank. It’s a role he took on 22 years ago after the sudden death of Tammy’s father, Thomas.

“As reported in the history booklet published by Mercy Hospital, the hospital didn’t have the money to make payroll. I don’t think we could do it today with bank regulations, but Mercy Hospital reported that Bill said go ahead and write the checks to your employees, we will cash them and wait for payment until Mercy’s account has sufficient funds. That was $80,000 in the 1930s. That was the nature of the relationship.”

Dr. Hagan, Sr. died in 1928 but his son, Edward Hagan, Jr., became a physician who delivered countless babies in Williston. He was also a World War II hero and a pillar of the community who had a clinic named after him.

The history of these founding families is rich, according to David Hanson, President and CEO of American State Bank and Trust Company.

“The founders of our bank were very supportive and dedicated to the hospital. It’s unique in business to have an organization that is over 100 years old, so it’s also fairly unique to share that longevity,” he said. “Over the years, several of our employees have served on the hospital’s committees and boards and that continues to this day.”

Sogard pointed to the bank’s support of every one of the hospital’s campaigns.

“That’s our history and we’re not going to change that,” he said. The support is also very personal to the family. He recalled the way Tammy’s father, Thomas, would give blood whenever the Sisters said it was needed.

“He must have been a universal donor. Those Sisters had a grip on a lot of people around here,” Sogard joked. “I was young but I remember them. They were all about service to our community.”

The relationships that started on that dusty 1906 day endure. “It’s a 116-year history that continues and is very strong,” said Sogard.